Founded in 1524 by Grand Duke Vasily III, The Novodevichy Convent is located in south-western Moscow. It is one of the most beautiful and well-known sights in the capital of Russia. The Novodevichy Convent is especially remarkable for its architectural characteristics and its location, on the banks of the Moskva River. One of the most important parts of this convent is the New Cemetery, which became the most upscale in the city in the last century. The convent is a perfect example of the excellence of Russian architecture. In 2004, it was proclaimed a UNESCO World’s Heritage Site. 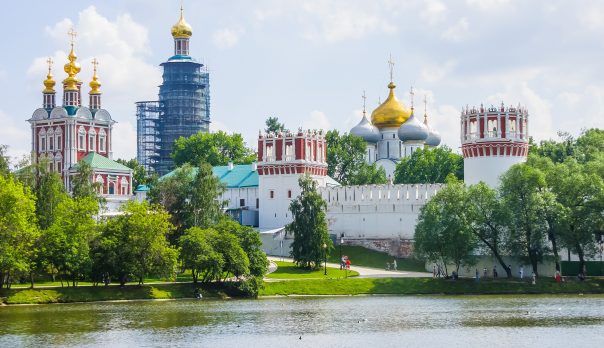 A marvelous 17-century convent complex with richly decorated cemetery was a final resting place of Russia’s most famous writers, poets, politicians and public figures including Chekhov, Shostakovich, and many others.
On the territory of The Novodevichy Convent, you can visit a lot of beautiful sights with a unique atmosphere. The Church of the Assumption (Uspensky tserkov) to the right of the Cathedral, the Gate-Church of the Transfiguration (Preobrazhensky tserkov) at the entrance of the Convent, very famous Cathedral of the Virgin of Smolensk (sobor Smolenskoy Bogomateri), white and shiny Church of St. Ambrose and, of course, the Novodevichy Cemetery.

Do you want to visit the Novodevichy Convent?
Book a Russian Explorer Tour