A collection of charming old Russian towns formes the Golden Ring on the north-east from Moscow. These ancient towns, which also played a significant role in the formation of the Russian Orthodox Church, preserve the memory of the most important and significant events in Russian history.

The towns have been called “open-air museums” and feature unique monuments of Russian architecture of the 12th–18th centuries, including kremlins, monasteries, cathedrals, and churches. These towns are among the most picturesque in Russia and prominently feature Russia’s onion domes.

Arrival in Moscow. Transfer to the hotel with English speaking guide while a short tour en route. Check-in to the hotel.

Your English speaking guide will pick you up at the hotel with a private comfortable vehicle to start a city tour at the Kremlin, the heart of Russia.

You might be surprised how many ancient and magnificent structures one can see within the walls of the Kremlin: 15th century cathedrals, the bell-tower, the Patriarch’s Palace, the Grand Kremlin Palace and of course the richest museum – the Armoury, housing a fascinating collection of Imperial insignia including precious clothes and of course the famous Fabergé eggs. After visiting two of the 15th century cathedrals, follow the Red Square, the very center of Russian history.
After lunch (at leisure) go to the best viewpoint on Sparrow hills, which unfolds the most picturesque panorama of the city.

While visiting the refined New Maiden Convent, known as a Novodevichy Convent, you will sink in the atmosphere of the medieval Russia, when even daughters of tsars were doomed to become nuns, according to the rules of that time. This is one of the most beautiful of the city collection of buildings, with 16 gilded domes, founded in 1524. Next door is the Novodevichy Cemetery, which contains the tombs of many Russian and Soviet notables, including Chekov, Scriabin, Shaliapin, Stalin’s first wife and Khrushchev.

Metro ride will take you to the spectacular underground palaces where you will admire the unique of its kind the palatial style of subway stations.

Overnight in Moscow. (B)

Depart from Moscow to Sergiyev Posad. The first stop on our Golden Ring tour around a cluster of ancient towns is Sergiyev Posad with its prominent landmark – the Trinity-Sergius Lavra. It used to be the central monastery of the Russian Orthodox church and a place of orthodox Christian pilgrimage.

It features the grandiose monastery complex of the 14th-century Trinity Lavra of St. Sergius. The complex’s Descent of the Holy Spirit upon the Apostles (or Assumption) is topped by blue and gold onion domes and its interiors are decorated with the well-preserved renowned frescoes. You will enjoy the bells ring from a towering blue-and-white belfry.

Lunch and Transfer to Rostov the Great

Lunch at a local cafe in Sergiev Posad. Transfer to Rostov the Great.

Rostov the Great (in Russian known as Rostov Velikiy) is one of the earliest historically attested towns in Russia, first mentioned under 862 in the ancient chronicle “Tale of Bygone Years.” Throughout the 10th century, Slavic settlers—primarily from the Novgorod lands—moved into this area, already sparsely inhabited by Finno-Ugric tribes.

In 988, Prince Vladimir of Kiev, the Christianizer of Russia, gave the Rostov lands to one of his sons, Yaroslav, who subsequently became the Kievan prince known as “the Wise.” Visit Spaso-Yakovlev Monastery, which was founded in the 14th century by St. Iakov of Rostov, and Rostov Kremlin, one of the oldest in Russia. Then we will continue our journey to the next Golden Ring city Yaroslavl.

Dinner at a hotel restaurant and overnight in Yaroslavl.  (B, L, D)

The city of Yaroslavl has been founded in 1010 as an outpost of the Principality of Rostov the Great, and was first mentioned in 1071. Get known its historical and cultural treasury – Spaso-Preobrazhensky Monastery, and a symbol of the city, Ilya the Prophet Church, which interiors are so marvellously preserved as they are considered some of the most bright and beautiful you will see in all of Russia.

Frescoes, with a distinct blue which is typical to the Golden Ring region, cover every possible surface, soaring all over the walls and roofs and telling well known stories from the Bible. The church’s amazing acoustics will add to the enchanting historic feeling of the place.

Afternoon transfer will take you to Kostroma, another gem on the Golden Ring tour, located at the confluence of the Volga and Kostroma Rivers.

After lunch at a local café, visit the most charming highlights, such as Ipatievsky Monastery, with white stone walls and domes of the cathedral painterly look at the background of Kostroma landscapes. Another remarkable site among the religious monuments is the Kostroma Trinity Cathedral.

Transfer to Suzdal for accommodation at a hotel. Dinner at a local restaurant. Overnight in Suzdal. (B, L, D)

After breakfast, you will start your day with touring around fabulously ancient and wonderfully adorned Suzdal, the place that occupies a special position among the other old Russian towns. The entire town is a museum which has hardly changed for the past two and a half centuries.

Over one hundred monuments, dating from different periods of the past millennium are concentrated here. Among the other objects you will visit the unique museum of wooden architecture, see lots of big and small churches and listen to the bells’ concert in Spaso-Efimievsky monastery.

In the afternoon you will visit Vladimir town.
The history of this town goes back over one thousand years. It was founded in the 990’s on the banks of the river Klyazma by Prince Vladimir. Unique memorials of XII still remain in the town — Cathedrals of Assumption and St. Demrtrius Cathedral.

Return back to Suzdal for dinner at a local restaurant and overnight. (B, L, D)

Since morning you will have a chance to admire the historical sights of Suzdal. You will visit the Kremlin, the ancient trading rows and Krestovaya Palata. The Suzdal Kremlin is the oldest part of the Russian city of Suzdal dating from the 10th century.

The Cathedral of the Nativity of the Theotokos in Suzdal, is a World Heritage Site and one of the most prominent complex monuments of Russian medieval architecture. Visit Krestovaya Palata (Cross Chamber) of the Archbishop’s Palace, which houses the museum with exposition of old Russian paintings and display devoted to 1000 years of Suzdal’ s history.

Lunch and Transfer to Moscow

After lunch at a local restaurant in Suzdal, we will drive to Moscow.

Overnight in Moscow. (B, L)

After breakfast and check-out from the hotel, time permitting, you can visit the Tretyakov Gallery, the foremost depository of Russian fine art in the world.

Departure transfer to the airport. (B)

Land package rate for 2 people
from $ 3,688 US per person sharing a double room

The price doesn’t include: 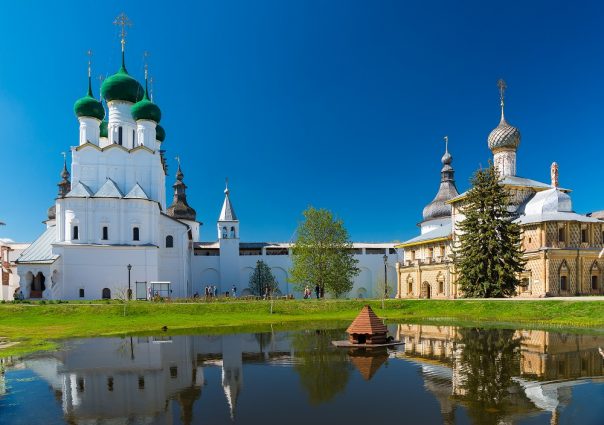