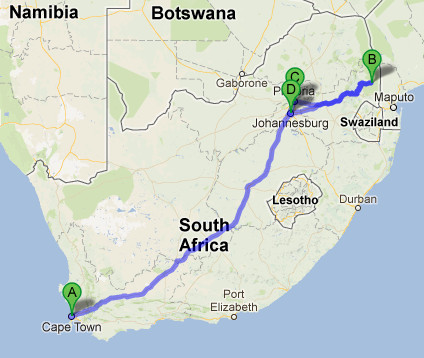 Famous for diamonds, gold mines and breathtaking scenery, Jewish immigrants from Holland and Germany began arriving in South Africa in the early 19th century and played an important part in the diamond and precious stones industry. Later on many South Africa Jews were staunch supporters of the anti-apartheid movement. The Jewish population of South Africa can be found mainly in five urban areas – Cape Town, Durban, Johannesburg, Port Elizabeth and Pretoria.

Transfers to and from the airport

Depart on your overnight flight to Cape Town, South Africa.

Upon arrival in Cape Town you will be met on arrival and transferred from the airport enjoying an orientation tour of the city en route to your hotel.

Your sightseeing tour this morning will delve into the intriguing history of this fascinating city. We begin with a visit to Table Mountain. Flanked by Devil’s Peak to the east and Lion’s Head to the west, you can go all the way to the top to enjoy the sweeping vista. Next is the South African National Gallery, the premier art museum of South Africa housing an outstanding collection of South Africa, African, Dutch, French and Flemish art.

Then we head to the South African Museum, founded 1825 and featuring an extensive number of exhibits. See the beautiful Victorian styled Houses of Parliament completed in 1884 incorporating Corinthian porticos, pavilions and a huge central dome. Continue to the picturesque Malay Quarter nestled against the slopes of Signal Hill in one of the oldest parts of the city.

Next is City Hall, a large Edwardian building in the city center whose Turret Clock strikes the hours and chimes the Westminster quarters. Stop at the Castle of Good Hope built between 1666 and 1679.The tour concludes at the Victoria and Alfred Waterfront located between Robben Island and Table Mountain where you can spend time exploring its unique shops. Return to the hotel in time for dinner.

We begin with a scenic drive through the countryside enjoying South Africa’s legendary wine country. Travelling through the Franschhoek Valley, we stop to visit one of the many wine estates for some wine sampling. From here we continue to historic Stellenbosch often referred to as “the city of oaks”. Time will be spent at a wine estate with lunch. Return to your hotel for dinner and overnight.

The day will be spent discovering the Jewish heritage of Cape Town. You will have the opportunity to visit the South African Jewish Centre housing the South African Jewish Museum. Officially opened by Nelson Mandela in December 2000, the entrance situated in the Old Synagogue was built in 1863 and contains a unique collection of ceremonial objects belonging to the original members of the community.

Proceed to the Cape Town Holocaust Center, the only Holocaust Center established in Africa, featuring its Gitlin Library which houses some 20,000 Jewish-themed items. There will be time for lunch with members of the Cape Town Jewish community and perhaps a chance to visit the Zaandwijk Winery, the only Kosher winery in South Africa. Dinner at the hotel.

We transfer to the airport for connecting flight to Mpumalanga International Airport where we will be met and transferred to the Lions Sands Private Game or similar located in the world famous Sabi Sand Game Reserve which forms part of the greater Kruger National Park. There are no fences on the reserve which allows the wildlife to travel freely between the reserve and the Kruger National Park in their natural environment.  As the sun begins to set, enjoy your first Game Drive followed by dinner.

Experience an exciting Game Drive at dawn and an exceptional opportunity to view Africa’s “Big Five” featuring buffalos, elephants, leopards, lions and rhinoceros. Travel in an open-roofed by jeep or travel on foot with your experienced game ranger and tracker. Return to the reserve in time for lunch. Later in the day we set out on another Game Drive at dusk coming back to the reserve for dinner.

After an early morning game drive followed by breakfast, we head out on our scenic drive to through Johannesburg, passing the small farming community of Hazyview. On arrival in Johannesburg (also known as Jo’burg) we check in to our hotel. There will be time to relax and freshen up in time for dinner.

We begin our tour of the city starting in the sprawling township of Soweto located 20km southwest of Jo’burg and once the former home of President Nelson Mandela and Archbishop Desmond Tutu. The city of Johannesburg has the largest urban black population in Africa and is synonymous with the struggle for freedom in South Africa. During your visit stop at a shebeen, a traditional meeting place for blacks during apartheid.

Afterwards we visit the Jewish Community Centre and stay for lunch. The balance of the afternoon is free for relaxation or to explore on your own. Dinner at your hotel. This evening join the Jo’burg worshippers as they attend Shabbat service.

We drive to the nation’s capital, Pretoria, for a scheduled sightseeing tour. You will have the opportunity to see such sights as the Union Buildings which houses the offices of the President of South Africa. Next is the Sammy Marx house, a grand Victorian mansion known as Zwartkoppies Hall located 23km outside of Pretoria, which epitomizes the elegance of a prosperous colonial household.

In the afternoon we visit the Lesedi Cultural Village, a multi-cultural village where visitors have the opportunity to experience the lively and colorful traditions of the Basotho, Pedi, Xhosa and Zulu peoples. Our visit concludes with a Pan African gastronomic feast featuring delicacies. Sample such offerings as ostrich and crocodile.

We begin with a visit to Gold Reef City situated just 8km. from the center of Jo’burg. Here you will find a unique entertainment complex comprised of a theme park and casino. Housed in an old gold mine, the theme of the park is centered on the gold rush on the Witwatersand, where you can learn all about the history of gold. Afterwards we transfer to the airport for our flight home.

We can also custom-design tours of any size according to your individual requests.