Discover the Best of Turkey

Discover the best of Turkey: visit grand mosques and spice-scented bazaars in Istanbul, glide over valleys of Cappadocia on a hot air balloon adventure, visit a UNESCO World Heritage Site – the spa of Hierapolis in Pamukkale, explore the ancient city of Ephesus and Shrine of Virgin Mary, and dive into the blue waters of the Aegean sea in Kusadasi on one of our most popular 10-day tours. 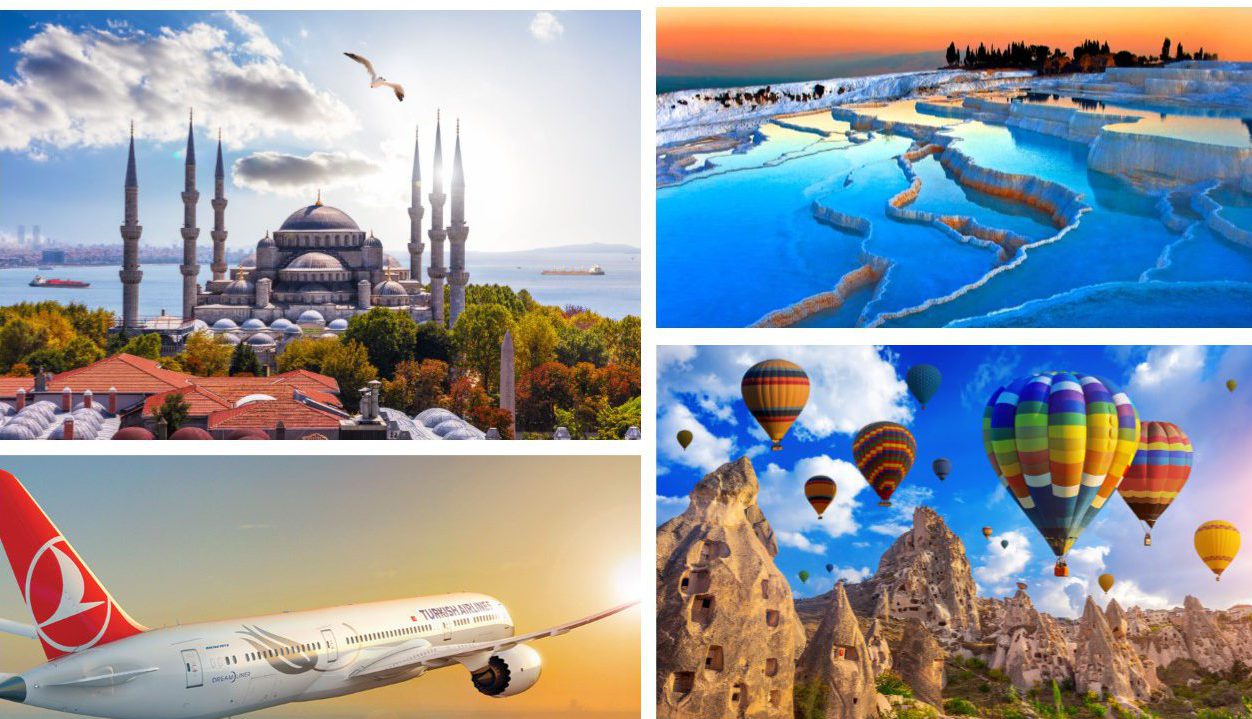 Upon arrival in Istanbul, you will be greeted by our representative and transferred to your hotel.

Constantinople stood at the crossroads of Europe and Asia, and in the early middle ages, the greatest city in Europe was not Paris, London or Berlin but Constantinople, the capital of Byzantium. It was an article of faith that a saintly emperor, divinely appointed, had founded Constantinople and that the city was as holy as Rome or Jerusalem. The Byzantine emperors attentively promoted the notion of a spiritual aura around the city. In 330 CE, when Constantine the Great dedicated the city as his capital, he called it New Rome.

The original peninsular city has seven hills, requisite for Constantine’s “New Rome.” Six are peaks of a long ridge above the Golden Horn; the other is a solitary eminence in the southwest corner. Around their slopes are ranged many mosques and other historic landmarks that were collectively designated a UNESCO World Heritage site in 1985.

The discovery will start with the visit of the main residence of Ottoman Sultans; the magnificent Topkapi Palace. The Topkapı Palace Museum is notable not only for its architecture and collections but also for the history and culture of the Ottoman Empire that it recalls. Topkapı Palace was built between 1459 and 1478 by the order of Sultan Mehmed II, the Conqueror. Its complex is located on the Sarayburnu, and surrounded by the Golden Horn and the Marmara Sea, and occupies an area of 700,000 square meters. In addition to being the seat of government and administration of the Empire, the palace was a center of education where future statesmen received their education and prepared to take over governmental offices. Craftsmen, who were trained in the palace, contributed to the formation of organizations outside the palace and shaped the Ottoman arts.

Continue to Byzantine Hippodrome which was the scene of chariot races. The Hippodrome was also used for other public events such as parades, public executions and the public shaming of enemies of the emperor.

Proceed to Hagia Sophia, constructed in 532-537 CE that continues to be revered as one of the most important structures in the world. Hagia Sophia was designed to be the major basilica of the Byzantine Empire and held the record for the largest dome in the world until the Duomo was built in Florence in the 15th century CE. Additionally, Hagia Sophia became more important with time as subsequent architects became inspired by the dome when building later churches and mosques.

Enjoy a short walk through the gardens on your way to Blue Mosque. It was completed in 1617 just prior to the death of its then 27-year-old eponymous patron, Sultan Ahmet I. The mosque dominates Istanbul’s majestic skyline with its elegant composition of ascending domes and six slender soaring minarets.

Rather, the careful choreography of more than 20,000 Iznik tiles rises from the mid-sections of the mosque and dazzle the visitor with their brilliant blue, green, and turquoise hues, and lend the mosque its popular sobriquet.

Return to your hotel for overnight.

After breakfast at your hotel, visit the Mosque of Süleyman the Great, built by the legendary architect, Mimar Sinan. The complex of Süleymaniye was the fourth imperial mosque built in İstanbul; the mosque’s four minarets with their 10 beautiful balconies are said to represent the fact that Süleyman was the fourth of the Osman sultans to rule the city and the 10th sultan after the establishment of the empire. The mosque and its surrounding buildings were designed by Mimar Sinan, the most famous and talented of all imperial architects.

Take a stroll through the fragrant Spice Bazaar that was built in the 17th as an extension of the New Mosque complex. It is a bustling oriental bazaar that provides a fresh supply of spices, dried fruits, Turkish delight, and caviar.

After lunch at a local restaurant, enjoy a cruise along Bosphorus on your private chartered boat to admire the scenic landscape of the strait adorned with historical edifices, old wooden houses, and picturesque neighborhoods on European and Asiatic shores of the water.

End the day soaking up Istanbul’s energy and spirit at Istiklal Street. Late Ottoman period stylish buildings, churches, mosques, coffee-houses, shops, pubs, and the nostalgic tram along this pedestrian street expose the harmonious existence of contemporary and traditional multi-cultural features of the city. After dinner at a local restaurant, return to the hotel for overnight.

After breakfast at the hotel, take a short flight to Kayseri to discover the fascinating region of Cappadocia that has a unique lunar landscape of terra and tuff cones, shaped by forces of nature over millions of years. For ages, men have dug into this soft but firm tuff to create dwellings, monasteries, churches, and underground cities. Upon arrival, you will first have a photo stop at the village of Uchisar to enjoy cone-like formations and well-preserved fairy chimneys around it. Located at the highest point of Cappadocia, Uchisar Castle has always been the main point of defense since the Hittite period. After lunch in a traditional cave restaurant, you will explore the Goreme Open Air Museum, which holds Cappadocia’s best collection of cave churches and is one of the first two UNESCO sites in Turkey since 1984. Cappadocia witnessed the penetration of Christianity in Anatolia. The first Christians escaping from the persecution in Jerusalem came to settle down in natural grottoes of the area where they carved out rock churches, adorning their walls with fine frescos depicting biblical and apocryphal episodes in brilliant colors. Head to your hotel for dinner and overnight.

You may choose to participate in an optional early bird hot air balloon ride over the other-worldly scenery of Cappadocia which offers a lifetime experience. After breakfast at the hotel, visit a traditional rug weaving center to learn about the three-thousand-year-old tribal art of Turks. You will be delighted to see a full procedure of silk cocoons and hand-spun wool yarns, being transformed into extremely fine carpets by magical fingers.  The next stop is the enchanting Devrent Valley where one feels as if travelling in a sculpture zoo that is entirely created by nature. Known also as the Imagination Valley this small canyon exhibits unusual rock shapes resembling animals that deeply strike the visitors. Following lunch in a local restaurant, you will discover the underground city of Kaymakli, among the most extensive ones in the region. Believed to have been built initially by the Hittites in the 15th century BC as military bases and greatly expanded by Christians for protection against persecution and the latter Arab raids.  Thousands of inhabitants could live in total secrecy in those mazy subterranean dwellings during times of trouble. Then enjoy photo stops at the famous Hunters’ Valley and Pigeon Valley to admire the other worldly landscape of the region. Next stroll around the impressive mushroom-shaped fairy chimneys with multiple stems and caps in Pasabagi Valley and explore amazing formations that are unique even for Cappadocia. Return to hotel for dinner and overnight.

This morning we leave the Cappadocia Region and cross the Silk Road. Visit the Sultanhani caravanserai, one of the largest in the world. Constructed in the 13th century, this Seljuk caravanserai was used as a rest stop for merchants and other travellers on the Silk Road.

In Konya, visit the Mevlana Museum, the former home of the Whirling Dervishes, and the location of Mevlana Celaleddin-i Rumi’s tomb. The founder of the order was Jalal al‐Din Rumi, a 13thcentury mystic, poet, and philosopher who is called Mevlana, “Our Lord.”

The Mevlevi are the most distinguished of the dervish sects because of the fame of their founder, who preached love, brotherhood, humanism, and tolerance in an age that was no more receptive than any other. Hegel called Mevlana one of the greatest poets and thinkers in history: Goethe and Gandhi were influenced by the tarn. Overnight and dinner in Konya.

Today, we drive to the unique site of Pamukkale, also known as ‘Cotton Castle’. This spectacular natural phenomenon was created by deposits from thermal waters that cascaded down the mountainside over hundreds of years, forming myriad pools and terraces. As the water overflows from the pools, dazzling cream-colored stalactites are formed that, from afar, resemble cotton or snow. The pools are filled with hot spring waters that supposedly have healing properties.

Close to Pamukkale you may find the ruins of Hierapolis, which was founded by the King of Pergamon in 190 BC and by the 2nd century AD had become an important Roman bath center. Hierapolis is an exceptional example of a Greco-Roman thermal installation established on an extraordinary natural site. The therapeutic virtues of the waters were exploited at the various thermal installations, which included immense hot basins and pools for swimming.

The extensive ruins of Hierapolis are well worth exploring and include a theatre, temple, holy area, monumental fountain, bath, basilica and necropolis. Return to your hotel for dinner and overnight.

After breakfast, drive to Aphrodisias, a Greek city established in the 1st C BC in the South West of Turkey within the Roman province of Asia Minor. The city was near a marble quarry and was renowned for its sculptors. Until about the 4th C AD it was a center for the cult of Aphrodite.

The marble ruins that remain today reflect the period of wealth and include the 1st century B.C. Temple of Aphrodite, a large public square (Agora) and associated Council House (Bouleuterion), Hadrianic Baths, a Theater, and a Stadium. Then visit the museum of the Aphrodisias which has an exposition of the statues created between the 1st century of BC and the 5th century of AC. Continue to Kuşadası. Overnight and dinner in Kuşadası.

After breakfast, visit Ephesus, which was the most influential capital city of Asia Minor on the Aegean Sea. Ephesus was the prominent commercial and cultural center of Asia. You will explore some of the best preserved theatres, fountains, and buildings in the world. Then visit the House of the Virgin Mary which was miraculously discovered hidden on a wooded hilltop.

The restoration work was done in the 50s and Vatican proclaimed the house as a holy place. In 1967, Pope VI Paul, in 1979 Pope II Jean-Paul, and recently Pope XVI Benedict made their pilgrimage to the Virgin Mary House. Overnight and dinner in Kuşadası.

After breakfast, transfer to the airport for your flight back. End of the program.