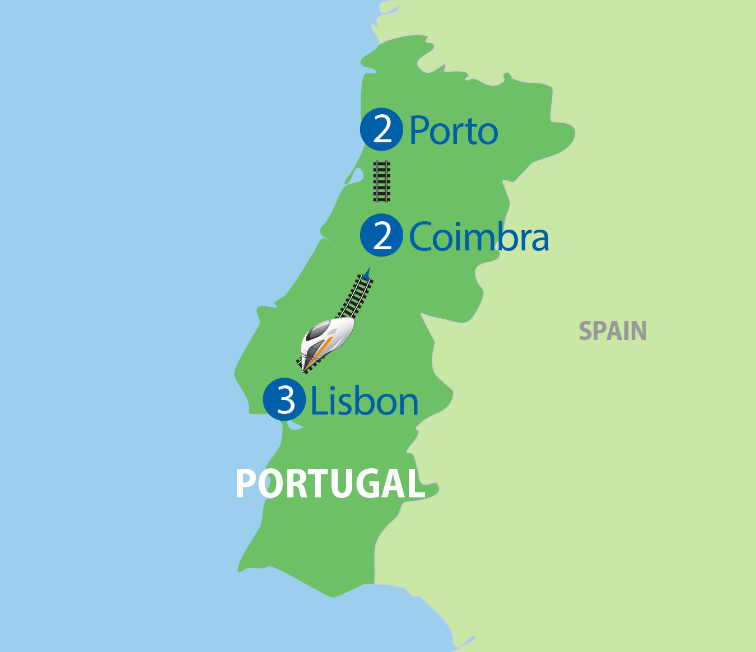 This itinerary has been prepared to allow visitors to experience three of the principal cities in northern Portugal. Your adventure begins in the enchanting capital of Lisbon built on seven hills. A drive along the banks of the Tagus takes you to Belem to see the Jeronimos Monastery and the Discoveries Monument. Then it is on to the ancient university city of Coimbra recently named a UNESCO World Heritage Site. And finally, a train ride takes you to the historic city of Porto with its Baroque and Gothic architecture.

Pre-post tour arrangements are possible in conjunction with this departure and can be combined with our Escorted tours, Adriatic cruises or other Independent journeys.

Rates are per person in USD, based on double occupancy.

Arrive in Lisbon, the hilly capital of Portugal and one of the oldest cities in the world. Lisbon was home to great explorers like Vasco de Gama and Prince Henry the Navigator. You will be met and transferred to your hotel. The rest of the day is at leisure.

Discover Lisbon with a hop-on hop-off city tour at your own pace.  See the historic Centre and  the  Praca Marquez de Pombal, a busy roundabout that marks the top of the Avenade Liberdade dominated by a statue of the Portuguese statesman, the Marques of Pombal, Sebastiao Jose de Carvalho e Melo.  See the popular Rossio Square located in the very center of the city with its wave-patterned pavement. Moving on we come to the monuments of Belem which includes the 52 metre high Discoveries Monument built to celebrate the 500th anniversary of the death of Henry the Navigator representing a ship’s prow with more than 30 statues of historical figures who played a large part in the Age of Discoveries. Standing on the waterside is the Tower of Belem built in celebration of the Age of Discoveries and to defend the mouth of the river. The Jeronimos Monastery was built mostly during the 16th century as a symbol of the times. Also see the Baroque/Neoclassical Basilica de Estrela with its impressive dome built in honour of the birth of her one and only son, Jose. All of the above have stops along the route.  (B)

Today is a free day.  Perfect for revisiting any of the above sights or taking an optional full-day tour of Sintra and Cascais.  Sintra, a place of magic and mystery is a charming Portuguese town situated within the Hills of the Sierra de Sintra and is dotted with palaces, castles and mansions. Just 19 miles west of Lisbon we find the resort town of Cascais known for its sandy beaches and marina, the ruins of a castle and its charming cobbled streets. (B)

This morning transfer on your own to the Lisbon train station where you board a train to Coimbra. Upon arrival transfer on your own to your Coimbra hotel. This afternoon discovers the old capital of Portugal “Coimbra” with a hop-on hop-off bus tour. The riverfront city of Coimbra is known for its famous University and its ornate buildings.  Coimbra also offers and a variety of medieval churches including two cathedrals and boasts the largest botanical gardens in Portugal. (B)

The day is free to relax or explore on your own.  You may be interested in an optional tour of the UNESCO Heritage sites of Tomar located some 78 km. from Coimbra. The Templar Castle and the Convent of the Knights of Christ was classified World Heritage Sites by UNESCO in 1983 and was known as the Templar City. The Templar Castle was built in three distinct walled enclosures was surrounded by an extensive outer wall. Next is the “Mata dos Sete Montes” which can be found in the centre of Tomar. This is the city’s main park which leads to the Castle of Tomar. Known as the Convento de Cristo, here you will find the Charolinha, a carved stone church in a dazzling setting. Finally, the Monastery of Santa Maria da Vitória, one of the most fascinating Gothic monuments in the Iberian Peninsula. Incredible architectural value and historical relevance set the way for it to be classified as a World Heritage Site in 1983.   (B)

Your independent journey ends today and you are transferred to the Porto airport. Adeus.  (B)