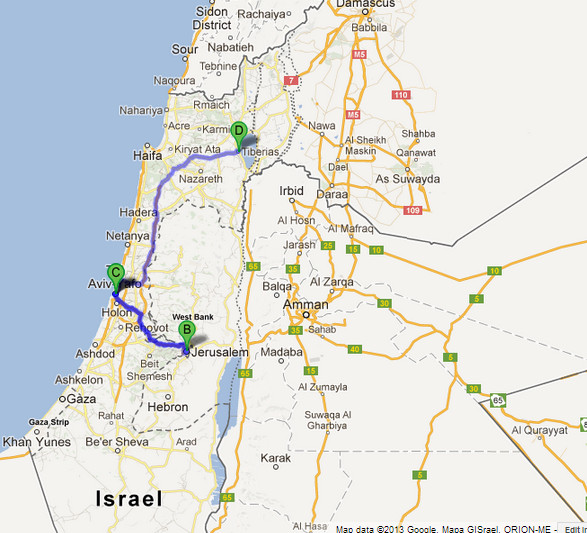 Journey to the land of the Bible. Visit sacred places and renew your faith. Pilgrims come to Israel from all over the world to experience the sacred places where Jesus lived, walked and preached. Retrace His steps and gain deeper insight into Christianity.

Your land arrangements include:

– All airport transfers and sightseeing as per the itinerary
– Hotel accommodation based on double occupancy
–  Meals as specified (B-Breakfast; L-Lunch; D-Dinner)
–  English speaking local guides
–  Entrance fees to the monuments

Your land arrangements do not include:

– Airfare to and from Tel Aviv
– Departure taxes, fuel surcharges or airport improvement fees
– Porterage at the airport or hotels
– Insurance
– Early check-in/late checkout
– Single room supplement – a limited number of single rooms available on payment of supplement
– Meals and beverages not mentioned
– Optional tours not mentioned
– Gratuities for individual services, laundry and valet service, and any other items of a purely personal nature
– Tipping to guide, driver, hotel or restaurant staff
– E. & O.E.

Welcome to Tel Aviv. On arrival you will be met, assisted and escorted to your bus for the drive into the Old Port City of Jaffa (Joppa) one of the oldest cities in the world and part of the metropolis of Tel Aviv. It was from here that Jonah embarked for Tarshish and was swallowed by a great whale; it was here that Peter stayed at the home of Simon the Tanner, raised Dorcas (Tabitha) from the dead and prophesied the vision of the pure and unpure animals. And, it was from here that the Cedars of Lebanon that were sent by King Hiram of Tyre destined for Solomon’s Temple were unloaded. Afterwards we check into the hotel. The balance of the day is at leisure. Perhaps to stroll along the beautiful beachfront promenade.

After breakfast travel north to Caesarea built by Herod the Great and once the seat of Roman rule. Visit the excavated Roman Theater and aqueduct once used to convey water into the city. It was here that Pontius Pilate imprisoned Peter and the first pagan Cornelius was converted to Christianity.

From Caesarea continue north to Haifa built on the slopes of Mount Carmel. Located just 90 kms. north of Tel Aviv, Haifa is home to the Baha’i Gardens and World Center, the holiest pilgrimage site for members of the Baha’i faith. Ascend Mount Carmel and enjoy the panoramic view of Haifa Bay and the beautifully manicured Baha’i Persian Gardens. Then drive through the Druze village of Usafiya where the National Anthem of Israel “Ha Tikva” was written and learn about this community that lives in Israel and serves in the Army.

Next is Muhraka on Mount Carmel where the dramatic battle between Elijah and the Prophets of Baal took place. From here we proceed to Megiddo, the archaeological site that inspired James Mitchener’s book “The Source” where we walk around and see the ancient man-made well and the Canaanite altar. Also known as Armageddon, it has been referred to as the site of the final battle between good and evil. Our day ends in the lakeside city of Tiberias built by Herod Antipas to honor Tiberius Caesar, today an important town on the Sea of Galilee. B

Our program today begins at the 2000 year old boat on display at the Yigal Allon Museum on the grounds of Kibbutz Ginosar. Known as the “Jesus Boat” this ancient fishing boat from the 1st century CE was discovered in 1986. Afterwards sit back and enjoy a 45-minute boat ride on the tranquil waters of the Sea of Galilee. Visit Capernaum, a 2nd century synagogue which threw light on the life of the community of that era. According to the Christian tradition, Jesus served here as a local rabbi and performed miracles.

Continue on to the Mount of Beatitudes, north of the Sea of Galilee, atop the Beatitudes Mount lies a beautiful church where you can enjoy a magnificent view of the northern part of the Sea of Galilee including Tabgha and Capernaum. Continue on to Caesarea Philippi (Banias), a pagan city dedicated to the god Pan and was reconstructed in ancient times by Philip, the son of Herod. Here Saint Peter made his proclamation of faith in Jesus, who declared him the rock on which he would build his church and promised him the key to the Kingdom of Heaven. The day concludes at Yardenit for a Jordan River Baptismal service and return to our hotel. Special white robes must be worn during Baptism. These can be rented or purchased on site. Costs not included. Overnight in Tiberias. B

NOTE:
Bathing suits must be worn underneath. If required, we can assist in providing a clergy to perform the Baptism. Costs not included. There is no resident clergy.

After breakfast we drive to Nazareth via Cana where Jesus turned water into wine to visit the Church of the Annunciation where Mary was first informed about her immaculate conception. Next we visit Herod Spring. Biblical tradition says it was at this site that Gideon chose his best soldiers to fight the Midianites, according to the way they drank form the stream. Only 300 of them lifted the water to their mouths, so they could remain on their guard while they drank. With this small band, Gideon brought victory to the Israelites.

We drive southeast to the ancient remains of Beit She’an, the city where Saul and his sons were hung up on the city walls by the Philistines (1st Samuel 31:10). We will tour one of the biggest excavated sites in Israel with its bathhouse and Cardo. Leaving the Galilee area we drive through the lush Jordan Valley where the desert now blooms with flowers and vegetation of every description. Ascend the Judean Mountains and upon arriving in Jerusalem, we will stop at a viewpoint overlooking the Old City where we shall celebrate our arrival to the Holy Land. Overnight in Jerusalem. B

After breakfast ascend the Mt. of Olives for a panoramic view of Jerusalem. Overlooking the Old City, the Mount is covered partly in olive trees, cemeteries and churches commemorating the Christian events of Jesus. Descend via Palm Sunday Road to visit the Garden of Gethsemane. Enter the garden with its ancient olive trees believed to date back to the times of Christ.

The garden is next to the magnificent Church of All Nations (Basilica of Agony) and the Greek Orthodox Church of the Tomb of the Virgin Mary. Enter through Saint Stephen’s gate and arrive at the Pools of Bethesda. The pool dates back to the 2nd century BCE and it was here that Jesus cured a sick man.

Walk along the Via Dolorosa to the Garden Tomb, an ancient Jewish sepulcher which matches the New Testament description of the tomb in which Jesus was buried. Optional visit to the Church of the Holy Sepulchre. This is in fact, a complex of various chapels built on what was called the Hill of Golgotha. Overnight in Jerusalem. B

After breakfast we visit the birthplace of Jesus when we travel into the ancient city of Bethlehem. We enter into the Church of Nativity and afterwards have some free time to do some shopping to bring home gifts for loved ones and ourselves.

Return to Jerusalem and walk through the Jewish Quarter which was reconstructed after the city was unified after the Six Day War in 1967. A special point of interest in the restored Jewish Quarter is the “Cardo” meaning the “heart” of this ancient Byzantine city. View the unearthed main Roman thoroughfare and ancient marketplace lined with columns.

We will then proceed to the holiest place in Judaism today, the Western Wall “Kotel”****. The Kotel is part of the few remaining structures of the Temple Complex built by Herod the Great. Visit the City of David and see the newest and exciting excavations of Jerusalem during the time of the First Temple period.  In Emek Tzurim we will spend a couple of hours taking part in an archaeological dig working with the actual debris of the Temple Mount. This is the area in which discoveries and finds are being made daily shedding light on the early periods of Jerusalem’s history. Overnight Jerusalem.B

After breakfast we travel to Yad Vashem, considered the primary memorial and museum of the Holocaust. Take a tour of the new Holocaust History Museum which occupies over 4,200 square meters mainly underground. We will depart for the Dead Sea area and descend to the lowest land point on earth at 1388 feet (423 m) below sea level. Continue on to view Jericho and stop at Kaser-El-Yahud, the site of the place of Baptism of Christ (Luke 3) and the Ascension of Elijah the Prophet (II Kings 2:11).

Proceed to Masada and ascend by cable car to the desert fortress of King Herod the Great to visit the Western Palace, the ancient synagogue and the Roman bathhouses. Time to float in the Dead Sea before returning to Jerusalem. (Time permitting) we will visit the beautiful Ein Gedi Reserve. See the waterfalls at this Oasis in the desert which is mentioned several times in the Book of Psalms, waterfalls and discuss the Biblical stories of King David hiding from King Saul. Overnight in Jerusalem. B

After breakfast visit the Israel Museum to see the Shrine of the Book where the Dead Sea Scrolls are exhibited and the scale Model of Jerusalem at the time of Christ. Drive to Abu Gosh, a large Arab village on the outskirts of Jerusalem for an authentic Middle Eastern meal. The village is known for having good relations with its Jewish neighbors and some of the best hummus in Israel, some say. Continue to Tel Aviv arriving at the airport for departure. B

TOURS ARE BASED ON A MINIMUM OF 20 PARTICIPANTS BUT CAN BE CUSTOMIZED FOR INDIVIDUALS BASED ON THEIR SPECIFIC REQUESTS.

*Site under the Palestinian Authority Jurisdiction – visit subject to situation
**Visit subject to weather conditions
***The sequence of the tour, border crossing point used, hotels used and sites visited may be amended due to circumstances
****Men must cover their head while in the prayer area and women must cover their shoulders and wear long pants or a knee-length skirt. If you forget to bring a covering, guards will provide you with a piece of fabric for that purpose before you enter. The prayer area is separated by gender. If you want to be super respectful follow Jewish custom by never turning your back on the wall.  You will see many people walking away from the wall backwards because it is simply disrespectful to turn away.