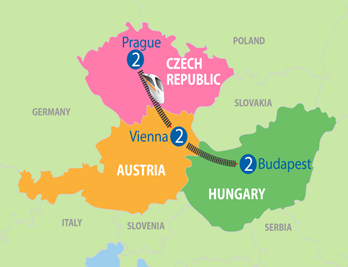 All departures are guaranteed! Travel any day!

This 7-day tour starts in Prague, the capital of the Czech Republic also known as the
“City of a Hundred Spires”, although the number 100 has been surpassed. During your tour, you will see some of the spires that make up the city. Next is Vienna, the capital of Austria also known as the city of music, art and culture. Finally Budapest, the capital of Hungary straddling the Danube River. All three cities have a rich history, a combination of architectural values, tantalizing cuisine and incredible art.

Your land tour does not include:

Airfare to Prague and back from Budapest
Departure taxes, fuel surcharges and airport improvement fees
Porterage at airports
Transfers between railway stations and the hotels are on your own as indicated
Meals and beverages not mentioned
Early check-in/late checkout
Optional tours
Entrance fees on hop-on/hop-off tours
Tourist city taxes are not included and must be paid by the passengers directly to the hotel.
Insurance though not included is strongly recommended
Gratuities of a purely personal nature such as laundry and valet service
Tipping to guide, driver and hotel staff
E. & O.E.

You may also choose to join our escorted tour “Bygone and Present Day Discovery of Germany” or “The Ancient Lands of Rumelia, a Journey through the Balkans

Day 1 arrive in Prague
Upon arrival in Prague, the city of 100 spires. Famous for its unique medieval architecture, the historical center of Prague is inscribed in the World Heritage List. Upon arrival at Prague airport, you will be met and transferred to your hotel. Your time is free to explore Prague on your own.

Day 2 in Prague
Discover the beauty of historical Prague with a hop-on, hop-off bus tour. Hop on and off as many times as you wish to visit your favourite attractions such as Prague Castle said to be the largest castle in the world with three courtyards and several magnificent buildings with its history stretching back to the 9th century. Next is Strahov Monastery. This Premonstratensian Monastery was founded in 1140 and contains the Strahov Library with its priceless medieval manuscripts, maps and globes. St. Nicholas Church is one of the most beautiful Baroque churches in Europe housing a monumental interior. (B)

Day 3 from Prague to Vienna
Today you take the train to Vienna. Train tickets are included but transfers between the railway stations and the hotels are on your own. Arrival in Vienna, the capital of Austria and known as the “City of Waltz”. The day free at leisure, we suggest a visit to Belvedere Palace. (B)

Day 4 in Vienna
Vienna, Austria’s capital has a rich history dating back to Roman times. Get an overview of Vienna’s most popular sights with a hop-on, hop-off bus tour. You can choose from up to two routes to sightsee at your own pace. (B)

Day 6 in Budapest
A hop-on, hop-off bus tour of Budapest features the Parliament with many of its 691 rooms still unused today. Crossing the Danube we see the Margaret Bridge which connects Buda and Pest. The historical Royal Castle palace complex of the Hungarian kings of Budapest is another of the cities attractions. One of the best-known landmarks is Fisherman’s Bastion found near Buda Castle was built in the 18th century to serve as a lookout tower. Matthias Church also known as the Coronation Church can be found in front of Fisherman’s Bastion. On the west bank of the Buda side of Budapest, we find Castle Hill famous for its splendid views and historic sites. Named after Saint Gerard, Gellert Hill overlooks the Danube while the Citadella can be found on its top. This fortress held strategic importance in the city’s military history. You will find Elizabeth Bridge named after Elisabeth of Bavaria at the narrowest part of the Danube connecting Buda and Pest. One of the major squares is Heroes’ Square with the Millennium Monument features statues of the Seven Chieftains of the Magyars. In the center of Pest, we find the Budapest Opera with its interior housing over a hundred statues and paintings while outside you will find statues of the greatest composers. Finally, St. Stephen’s Basilica named after Stephen, the first king of Hungary was the sixth largest church in Hungary prior to 1920.  (B)

Day 7 Depart from Budapest
Your independent journey ends today. You will be transferred to Budapest airport.  (B)