Spend the next 15 days visiting the Jewish highlights of Portugal and Spain. With your knowledgeable guide you will learn the history of the Jewish people who once made Portugal and Spain their home. By visiting the “must sees” you will learn about the Jewish communities, traditions and landmarks of a people whose very presence existed long before they actually became countries. If you are looking for an enriching experience, look no further.

Licensed local English-speaking guides wherever required as per itinerary especially where visits to important sites are included as follows:

Licensed local English-speaking guides wherever required as per itinerary especially where visits to important sites are included as follows:

The Tour Escort is an English speaking professional who will share general information about the country, will suggest restaurants when meals are not included, assist during check-in and check-out and when required.
Tour Escort is not able to do any local visit because of a Government tourist law.

The tour does not include

Day One- 14 May 2022 TORONTO/LISBON
Overnight flight to Lisbon. Get ready for an amazing tour. (Flight is not included)

Early morning arrival in Lisbon. A warm welcome by a representative at the airport and transfer to your hotel.

Rest of the day at leisure until the evening when we will meet in the lobby to join the other tour participants for our welcome dinner. Overnight in Lisbon. Welcome Dinner

Breakfast at the hotel. Departure on a full day tour of Lisbon with your local guide learning all about the Jewish legacy in the Portuguese capital. It is known that until 1496 there were three Jewish Quarters in Lisbon. Besides strolling through the Alfama, we will visit the Shaarey Tikva Synagogue in Lisbon. In the afternoon, we head to the district of Belém, where we find the monuments alluding to the time of the Maritime Discoveries in the 15th and 16th centuries. Free time for lunch. Stop at the Belém Tower (classified as a World Heritage Site by UNESCO), the 15th century fortress and departure point of caravels and at the Discoveries Monument to mark the 500th anniversary of the death of Henry the Navigator. We will also visit the Museum Calouste Gulbenkian. Return to the hotel. Overnight in Lisbon. Breakfast

Breakfast at the hotel and check-out. We set off for Tomar where your local guide will show you the Synagogue and Luso-Hebrew Museum of Abraham Zacuto. A very rare example of a medieval Jewish temple and pre-Renaissance Portuguese art. The Tomar Synagogue is the only one of its kind from this period to have been fully preserved in Portugal. Before leaving it is mandatory to visit the Templar Castle and the Convent of Christ in Tomar, a unique monument in the history of the western world awarded the classification of World Heritage Site by UNESCO. Built on a site that was originally used for Roman worship, this vast monumental complex illustrates seven centuries of Portugal’s history and contains several important mementoes of decisive moments in the history of the western world. Overnight in Porto. Breakfast

Breakfast at the hotel. Discover Jewish Porto as you walk along the streets where a community was born and developed, a community that is supposed to have appeared just before the foundation of Portugal. The Jewish Quarter of the city was situated deep in the heart of the village which in the 12th century was located near the Cathedral, in the area that is today defined by the ruins of the Convent of Monchique by the Torre dos Clérigos, Sé, Alfândega do Porto, the square and tunnel of Ribeira – and where some Jewish altars still survive in private estates. Walk towards the area of the old Mercado Ferreira Borges and visit the Palácio da Bolsa. This is where another Jewish Quarter once stood with a synagogue in its center in what is today known as Rua do Comercio do Porto. In the Boavista area, the hub of Jewish life in the 17th and 18th centuries, visitors can see the Kadoorie Synagogue, the largest synagogue in the Iberian Peninsula . This Jewish temple was built between 1929 and 1937. In the afternoon, sit back and enjoy a 50-minutes cruise along the Douro before heading back to the hotel. Overnight in Porto. Breakfast

Breakfast at the hotel. We set off to Castelo de Vide located at the bottom of a double hill crowned by a Medieval castle and the São Roque Fortress. There is a small “Judiaria” and a Synagogue, nowadays a museum that you will visit. The synagogue was transformed into a small museum that tells about customs, persecutions and the expulsion of Jews in the Iberian Peninsula between the 15th and 16th centuries. A jewel of a synagogue preserved over the centuries located in a Jewish Quarter with a lot of charm.

After lunch, a short drive will take us to Mãrvao, a pleasant and peaceful town that offers exceptional panoramic views of the plain and the Sierra de São Mamede. Its streets are narrow and the houses have picturesque roofs. The town is full of colorful flowers. Enjoy the breathtaking views over the mountains and Spanish frontiers.

Breakfast at the hotel. Discover the vibrant and modern city of Seville on a panoramic and walking tour which includes  the grand Plaza de España, site of the pavilion of the great 1992 exhibition. Next is the Barrio de Santa Cruz – the former Jewish Quarter with tiny cobblestoned streets and magnificent indoor gardens hidden behind sumptuous façades. Continue towards the Alcazar Palace still used as a residence for the Spanish Royal Family and the Cathedral which is said to be one of the largest in the world. Here, you can find the resting place of Spanish Kings and Queens as well as the impressive sepulcher of Christopher Columbus – but are his remains there?

Breakfast at the hotel. This morning check-out and transfer to Cordoba, the former home of many Jewish scholars and poets. Once the biggest city in all of Europe, Cordoba thrived and expanded with its unique blend of cultures. These are beautifully expressed on  your visit to the Mosque-Cathedral, the most significant Muslim architectural achievement in the Western world. Walk along the streets leading up to the Jewish Quarter that have been preserved with whitewashed houses and colorful courtyards. Transfer to Granada. Check-in at your hotel and evening at your own pace. Breakfast

After breakfast at the hotel, the local guide from the Alhambra will show you one of the Wonders of the World, the Moorish Palace of Alhambra and the Generalife. Located on a hilltop with the Sierra Nevada as background, the Alhambra’s exquisite design and layout has few rivals. You will be filled with a sense of mystique as you are guided past graceful courtyards, splashing fountains and lavish rooms. After lunch transfer to Toledo, the Jewel of the three cultures. Breakfast

After breakfast, The day is devoted to Toledo perched high on a hill by the Tagus River. With its naturally fortified location, Toledo was once the center for Jewish Spain with its rich, creative heritage. You will feel the atmosphere as you stroll the narrow alleys in its historic section, the true center of Spain widely considered a “pearl” in terms of its subtle beauty. Visit El Greco’s house, formerly the palace of the prominent Samuel Halevy  Treasurer of King Pedro I and architect of the El Transito Synagogue. Continue to the Synagogue de Santa Maria La Blanca later converted to a church and to the Synagogue del Transito which today houses the Sephardic Museum, both remarkable samples of Jewish culture. Continue to Madrid in the afternoon and enjoy time at leisure. Check-in at the hotel. Breakfast

Breakfast at the hotel. Take a sightseening tour of Madrid including the Salamanca district and the Bull Ring Arena, the second largest in the world. Then stop at the Torre Picasso and the soccer stadium Bernabeu. Continue on a walking tour towards the Royal Palace, a monumental construction of the seventeenth century, a mixture of Baroque and Classicism. See the Plaza de Oriente, the Opera House and the modern Almudena Cathedral. Afterwards walk through the “Madrid de los Austrias” and the impressive Plaza Mayor, one of the most popular and typical corners in Spain where you will have free time for lunch. Enjoy the evening at your own. During the afternoon the bus will transfer you back to the hotel. Breakfast

After breakfast depart for Segovia located in Castilla- León, one the 17 Provinces in Spain. Though only few traces remain of its glorious past, Segovia stills stands as a remarkable monument. On your walking tour discover the historic legacy of the Jews. Witness the imposing Roman Aqueduct and enter in heart of the ancient Jewish Quarter. Visit the Alcazar of Segovia, one of the most famous fortresses in Spain. Return to Madrid in the afternoon and enjoy a farewell dinner. Overnight in Madrid. Breakfast & Dinner

Breakfast at the hotel and check-out. Private transfer to Madrid airport. Breakfast

END OF OUR SERVICES 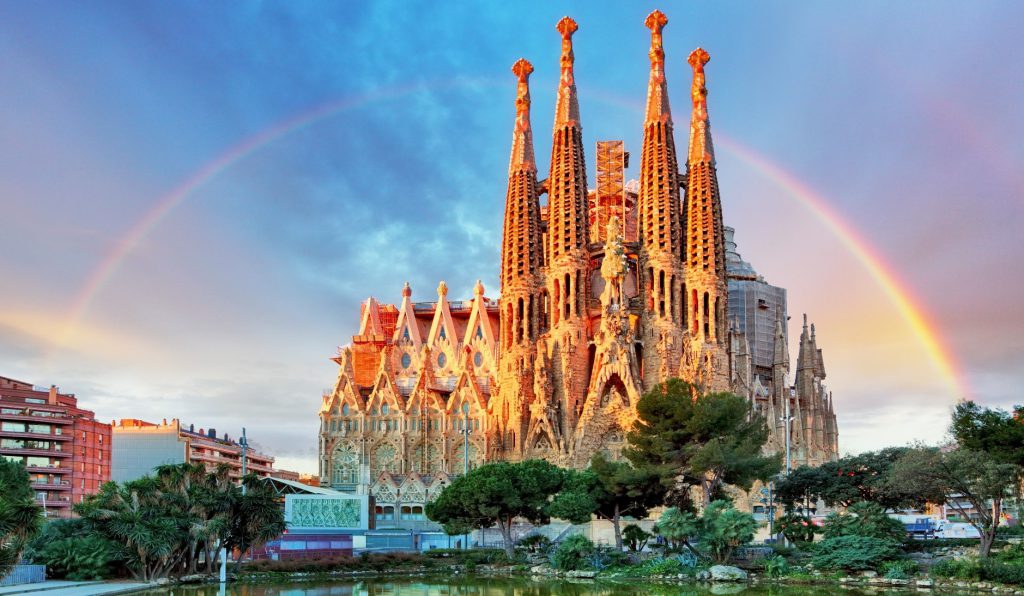 Van or bus size will depend on the size of the group where seat calculation is based on the number of participants + approx. 50% (example: for 12 participants there will be a minimum 18 seater, for 16 participants a 24 seater etc.) whenever possible.

Experienced English-speaking tour escort throughout including all his expenses (Note: We use a team of escorts who are of Israeli origin who have lived in Spain for many years and who know the terrain, the language and have rich and varied experience with Israeli and Jewish tour groups).

Licensed local English speaking guides wherever  needed as per the itinerary especially where visits to important sites are included as follows:

Licensed local English-speaking guides wherever  required as per the itinerary especially where visits to important sites are included as follows:

Local guides required and monuments included on the tour:

The Barcelona extension does not include

Transfer by fast tourist class fast train from Madrid to Barcelona. After a panoramic tour of Barcelona, the capital of the Catalonian province and the most exciting city in Spain. Begin with a visit to one of Spain’s landmarks, the incomplete architectural masterpiece created by Antonio Gaudi known as the Sagrada Familia (Sacred Family). Overnight in Barcelona.

After breakfast continue on a walking tour through the centuries-old streets and alleys of the Gothic Quarter of Barcelona. Your tour will include an introduction to the former Jewish area. Visit the oldest synagogue in Barcelona which has recently been restored. Remainder of the day at leisure. Overnight in Barcelona.

Breakfast than drive northwards to visit Girona which stands today not only as a charming example of Spain’s quaint early-Medieval ambience, but also as a reminder of the days when Jewish traditions flourished. Girona was once a link between the first Kabbalists of Provence and the poets and writers of Cordoba and Toledo. It was also a major Kabbalah Center. Jewish settlers came to Girona at the end of the 9th century and prospered until the Spanish Inquisition forced them into exile in 1492 – a span of 600 years! Walking through the “Call” (Jewish Quarter) still evokes this precious Jewish culture, an important part of the Golden Age of Spain. The spirit of our ancestors has never vanished. Visit the Archeological and Jewish Museums during your tour. Lunch than continue to Besalu to see the remains of the pre-Inquisition Mikveh. Return to Barcelona in the afternoon. Overnight in Barcelona.

Breakfast at the hotel and check-out. Private transfer to Barcelona airport.

END OF OUR SERVICES.