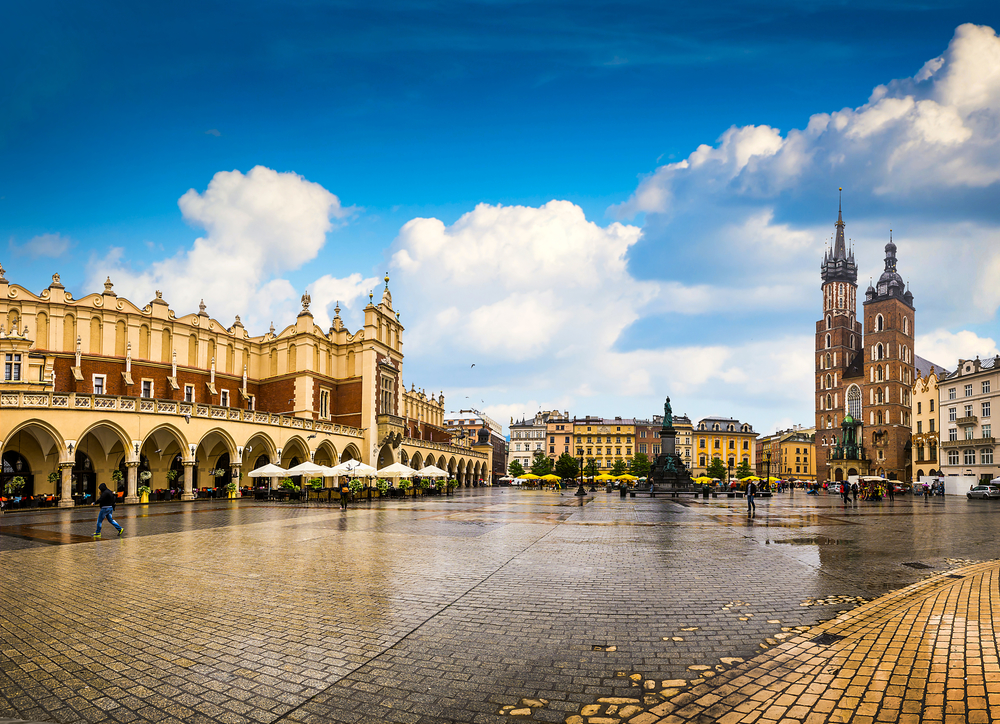 YOUR LAND TOUR PRICE DOES NOT INCLUDE:

Depart by overnight jet service via a European gateway. Inflight meals will be served during the appropriate times.

Day 2
ARRIVAL IN KRAKOW (no guide)

Morning arrival in a European gateway. Change planes and continue to Krakow, Poland.
On arrival at Krakow International Airport you will be welcomed by your driver (no guide) and transferred to your hotel for check in. (Official hotel check -in is from 3:00 p.m., if your room isn’t ready upon arrival your luggage can be left with the concierge). The balance of the day is at leisure to get acclimated with your surroundings and to do some exploring on your own. 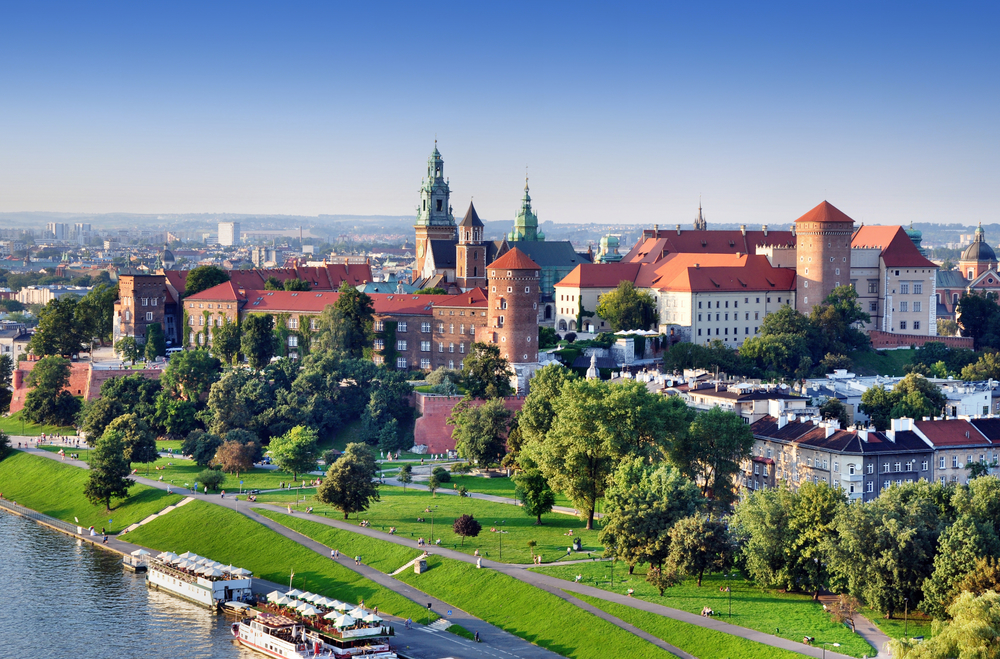 After breakfast at the hotel your guide will join you in the lobby. Depart on a guided walk to Krakow’s Market Square. We begin at the Kazimierz Jewish Quarter where you will see the Altshul, the oldest synagogue in Poland, the Rema Synagogue, the synagogue of Rabbi Moses Isserles, the “Rema,” the great codifier of Jewish law. Continue to the Rema Cemetery where many great rabbinical leaders of Polish Jewry are buried. Also visited will be the Temple, Krakow’s Reform congregation and the Galicia Jewish Museum which commemorates the victims of the Holocaust and celebrates the Jewish culture of Polish Galicia, presenting Jewish history from a new perspective.

Lunch on your own enroute.

Afterwards a guided journey that follows the Jewish community on their descent from Kazimierz crossing over the bridge into the Jewish Ghetto. The district of Podgorze stretched along the right bank of Wisla River opposite the historic Kazimierz Quarter. Here you will see the Krakow Umchlagplatz memorial, now known as the Ghetto Heroes Square and the Oscar Schindler Factory Museum which tells the story of the city of Krakow and its residents under Nazi occupation from 1939 to 1945.

The museum is housed in the administrative building of Oskar Schindler’s enamel factory. Schindler, a successful businessman and his wife Emilie managed to provide a safe environment for over 1,000 Jews and saved them from being sent to Auschwitz. They were later bestowed with the title of “Righteous among the Nations” at Yad Vashem in Israel. Return to your hotel. Dinner on your own and evening at leisure.

Day 4
THE DESTRUCTION OF EUROPEAN JEWRY

Following breakfast your guide will be waiting in the hotel lobby to begin your tour. 75 kms. west of Krakow lies Oświęcim known as Auschwitz under the German Occupation. It is here that one of the darkest times in Jewish history took place. Your guided visit will take you through the Auschwitz-Birkenau Complex, reflecting on personal stories and texts. As you walk through the Auschwitz Museum exhibits built in the original blocks of the camp, you will original artefacts and footage and witness the life and death of the prisoners of this work camp.

A short drive will take you to the Auschwitz II death camp, better known as Birkenau. This camp was barely touched or renovated, allowing you a first-hand experience to understand the last moments of the prisoners of this camp. The train tracks that led directly into the camp still remain. Participants will be provided with a boxed lunch enroute. Return to Krakow. Dinner on your own and evening at leisure. 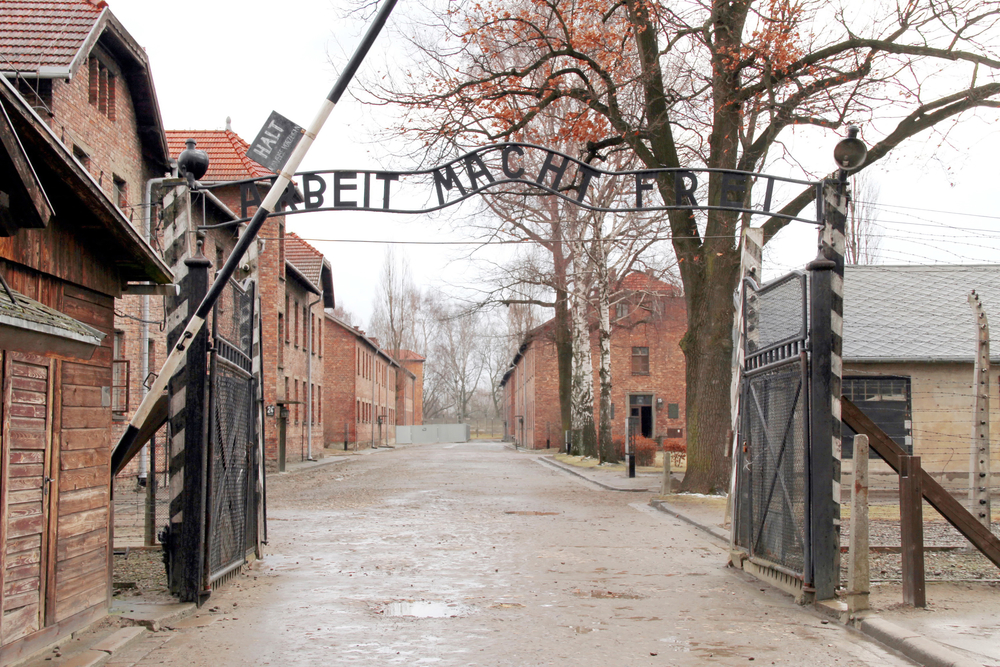 Day 5
FROM KRAKOW TO WARSAW – THE WORLD THAT WAS

After breakfast we check out of the hotel and transfer to the Krakow train station for departure by train to Warsaw. (The train journey is approximately 2 hours and 20 minutes.) On arrival in Warsaw you will be met by your guide to start your “The World That Was” guided visit through the Okapova Cemetery, one of the largest Jewish cemeteries in the world bearing witness to hundreds of years of Jewish life in Poland.
Lunch on your own.

After lunch we head to the newly-opened Museum of the History of Polish Jews located in the center of what once was the Jewish Ghetto. Explore 1,000 years of rich history of Polish Jews starting with their arrival as merchants through the medieval ages up until today. This 43,000 sq. ft. museum includes rare and valuable art, photos, documentation and footage of what was once the largest Jewish community in the world. Your guided visit through the Warsaw Ghetto includes the Remnants of the Ghetto Wall, the Warsaw Ghetto Memorial, Mila 18 and Umschlagplatz, the site of the deportation of the Warsaw Jewish community to Treblinka.

Check into your hotel. Dinner on your own and evening at leisure. 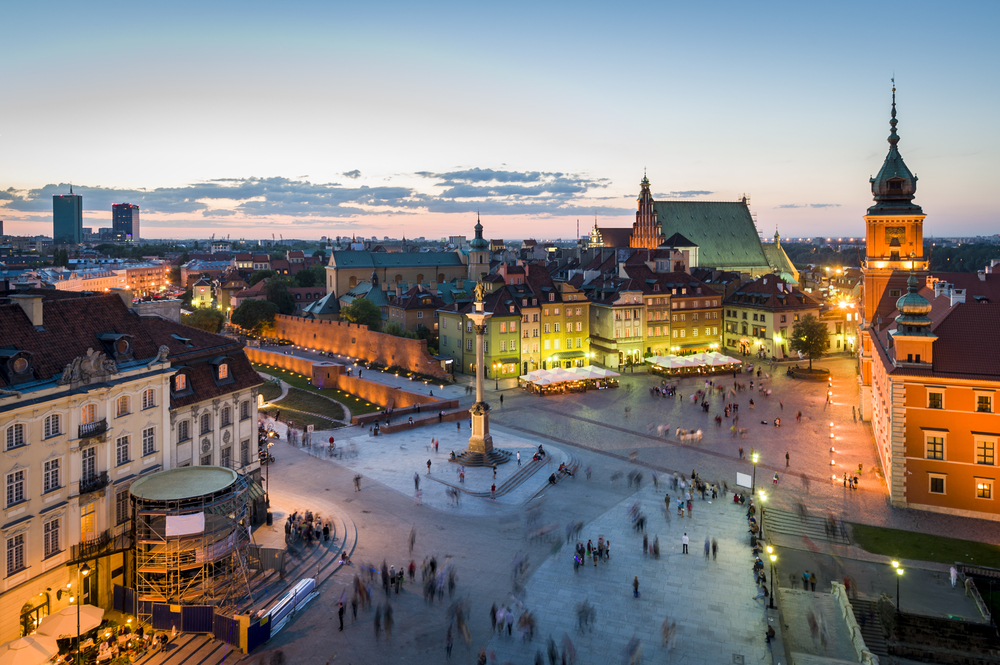 Day 6
FROM WARSAW TO BUDAPEST

After breakfast we check out of the hotel and transfer to Warsaw Airport for departure by air to Budapest. (Flight cost not included.) On arrival in Budapest transfer to your hotel for check in. (Official hotel check-in is from 3:00 p.m., if your room isn’t available your luggage can be left with the concierge).

The remainder of the day is at leisure to explore Budapest on your own with an opportunity to wander along Vaci Utca (Vaci Street) one of the main shopping streets of Budapest lined with shops and cafes. Walk through the enormous enclosed market where you can find anything from fruits and vegetables to souvenirs.

Visit Margaret Island in the middle of the Danube in central Budapest once known as the Island of the Rabbits because of the many rabbits that made the island their home. The island was named after Saint Margaret (1242–1270), the daughter of King Béla IV, who lived in the Dominican convent on the island. King Béla IV vowed to raise his daughter as a nun if Hungary survived the Mongol invasion. The island features romantic walkways, mediaeval ruins, a small zoo, musical fountain, a water tower, swimming pools, a water park and an open air theater and cinema.

A visit will be paid to Budapest`s City Park (Varosliget) which features Vajdahunyad Castle, the City Park Lake which is great for rowing in the summer and ice skating in the winter, the Budapest Circus and the Municipal Zoo which is over 100 years old. Visit the Szechenyi Bathhouse, the largest medicinal bath in Europe which houses a number of indoor and outdoor pools. Enjoy a cruise on the Danube River to see Budapest`s major landmarks in a different light. 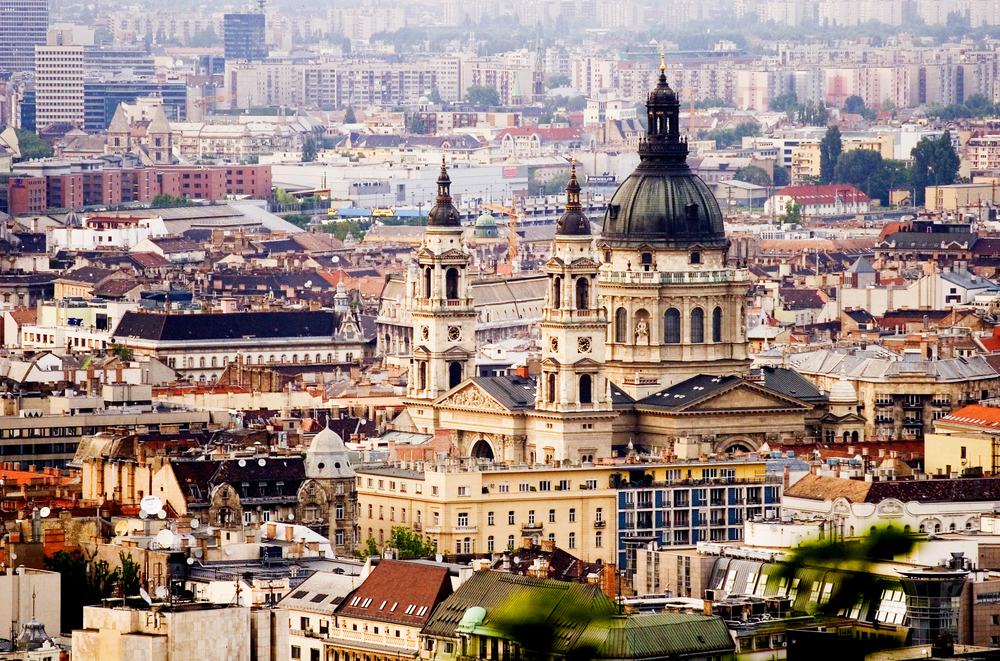 (no guide)
The day is yours. After breakfast explore the city on your own. A good time to stop for a coffee and pastry and Café Ruszwurm, one of the oldest traditional cafes and confectioner`s in the city. A charming place with small tables and chairs offering a wide range of pastries or perhaps dinner at Gundel. The pioneering work of Karoly Gundel placed Hungary on the world map of gastronomy. Opened in 1910, its reputation for good food as put Hungary as the country`s leading restaurant.

The restaurants guest include several presidents and Prime ministers of Hungary, politicians, artists etc. as well as famous people from around the world including Queen Elizabeth 11, Pope John Paul II and so on.

After breakfast at the hotel our guide will join us in the lobby. Leaving the hotel we take a panoramic bus tour along Andrassy Avenue and visit Heroes` Square, one of Budapest`s landmarks. Relive 1,000 years of Hungarian history through the square`s impressive statues of kings and leaders. Explore the story of Jewish Budapest over the past 150 years featuring visits to the Dohany Street Synagogue, the largest synagogue in Europe. Built in 1859, the synagogue holds 3,000 seats and is home to one of the Neolog communities in Budapest. The synagogue and the Jewish museum are housed in the same building. Franz Liszt played the organ here in 1859, the year the synagogue opened. Famous movie starts like Tony Curtis and make up mogul Estee Lauder spearheaded the restoration of the synagogue in the 1990`s in memory of their families.

The Jewish Museum housed on the site of Theodor Herzl`s family home, holds a unique collection of Jewish artefacts, art and memorabilia which shed light on the rich Jewish life and predominant Jewish community of Hungary, its influence on Hungarian society and its long-lasting memory. The impressive Community Holocaust Memorial stands in the complex courtyard and commemorates the 500,000 plus Hungarian Jews who perished in the holocaust.

Lunch on your own enroute.
Driving through the city crossing the river and ascending Castle Hill we travel from Pest to Buda. Amongst the historical sites we see is the first Royal Castle of the city. Enjoy the panoramic views of Budapest from the top of Fisherman`s Bastion which commemorates the fishermen who guarded the city.
At the end of our tour we return to the hotel.

A chance to enjoy Budapest

S vibrant nightlife on your own. Stroll along the Vaci Utca and enjoy people watching. Feel the vibe with its many local boutiques, shops, cafes and many local international cuisine options. See the Jewish Quarter come to life. Enjoy Kazincy Street`s restored and renovated warehouses better known as the Ruin Pubs which have been transformed into fashionable bars and bistros. Explore Gozsdu Udvar as you make your way through its passages and courtyards featuring a wide range of restaurants and bars. Good food, live music and dance club options are spread through the neighbourhood. 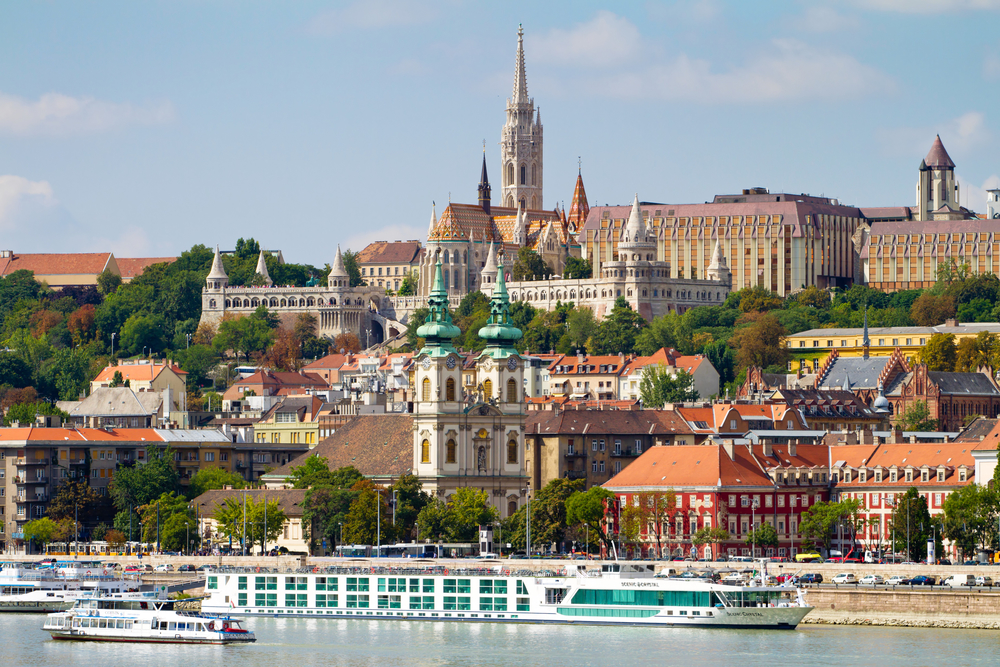 Day 9
FROM BUDAPEST TO PRAGUE

After breakfast at the hotel, we check out and transfer to Budapest Airport for our flight to Prague. (Cost of the flight not included). On arrival in Prague you will be transferred to your hotel for check in. (Official hotel check in is from 3:00 PM. If your room is not available, your luggage can be left with the concierge.

The remainder of the day is at leisure to explore Prague on your own. Perhaps to bike along the river, take the funicular up to Petrin Hill for a great view of the city, a stroll through the Rose Garden, visit an art gallery, visit the Franz Kafka Museum or enjoy a boat ride on the Vlatava River.

Following breakfast we will be joined by our guide in the hotel lobby. Our tour begins with a transfer to Prague Castle for a guide tour, an overview of the City of 100 Spires. Walk along the Golden Lane, a tiny street between the Bila Tower and the Daliborka Tower lined with tiny colourful houses that were built into the castle`s fortifications around the end of the 16th century and were occupied until the Second World War.

The renowned writer Franz Kafka lived in house No. 22. Walk through the Lesser Town known as Malá Strana with its clusters around the foothills of Prague Castle and cross the 14th century stone Charles Bridge (Karlův most) which links the two sides of Prague. This is the main pedestrian route connecting the Old Town with the Lesser Town. Enjoy the view of Prague from Charles Bridge which is lined with 30 statues.
Lunch on your own enroute.

Afterwards a guided visit through Jewish Prague which includes the Old Ghetto and the Precious Legacy Exhibit at the Jewish Museum which encompasses the Old New Synagogue, the Maisel Synagogue, the Pincus Synagogue, the Old Cemetery and the Spanish Synagogue. Afterwards return to the hotel.
Dinner is on your own.

Breakfast at the hotel then we meet our guide in the lobby. This morning we head for Terezin some 30 miles south of Prague. Originally a holiday resort reserved for Czech nobility, Terezin was contained with the walls of the famed fortress known as Theresienstadt named in honor of Empress Maria Theresa mother of Emperor Joseph II of Austria.

See the town turned into a ghetto and concentration camp. Visit the Historical Museum and the Art Exhibits, the so-called Hidden Synagogue and the Crematorium.
Packed lunch enroute. Return to Prague with free time for last minute shopping, packing or relaxing.

Following breakfast at the hotel check out and transfer (no guide) to Prague International Airport for your departure flight to Toronto arriving the same. 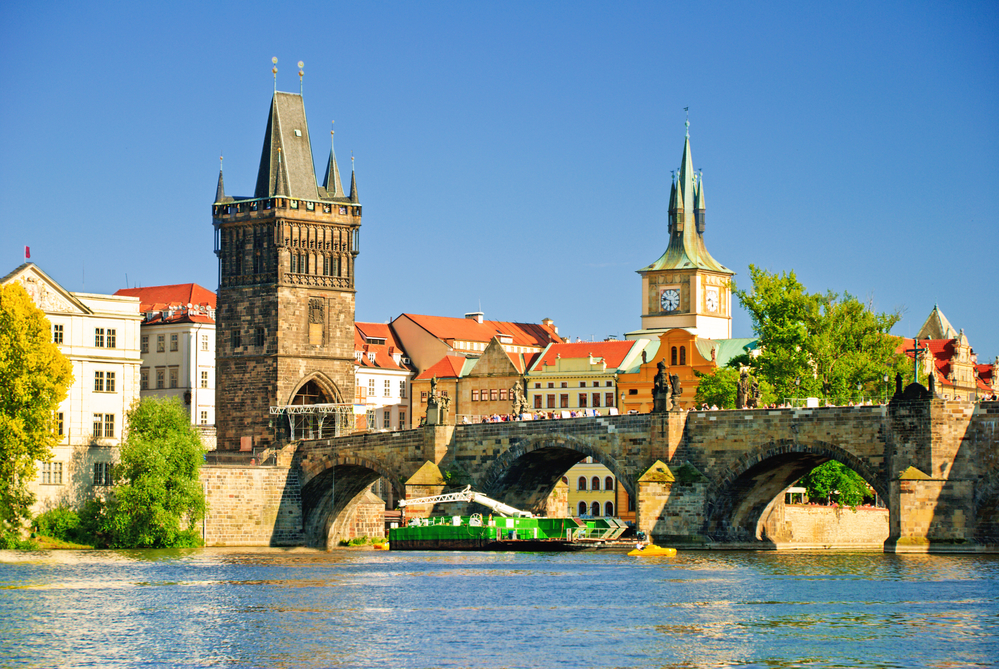