300m high of Azat river there are the ruins of the inexpugnable Garni Temple, one of the most antique memorials of Armenian architecture.
The citadel and pagan temple of Garni is a figurative monument of the Hellenistic period and an impressive piece of ancient Armenian architecture. After proclaiming Christianity as a state religion in Armenia in 301, the temple was probably used as a summer residence of the kings.

In the first century A.D. King Terdat I constructed a magnificent pagan temple in the fortress dedicated to the god of sun Mithras. The Temple itself represents a magnificent architectural beauty and fabulous perfection of its forms. In 1679 a terrible earthquake ruined the entire construction. The remnants of the temple were disclosed only 300 years later along with the remains of the royal palace, the barracks, a Roman bath and a Christian church. 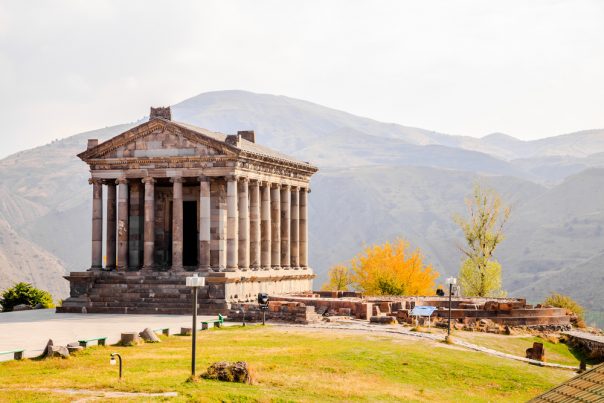 In fact, the temple was originally dedicated to Mithra. Mithra is the translated as “Helios” from the Greek meaning “Sun” or the “God of Sun.”

Garni temple remains the one and only construction representing the Hellenistic architecture in Armenia. The geometry of the temple is linked to Armenian commitment to the laws of nature, which affected the architectural style. They considered geometry as a contact with gods. Armenians also believed in the power of numbers. According to their beliefs, three, six and nine were the sacred numbers. Due to that fact, you can see these numbers throughout all the temple, or their combinations, demonstrating this system of design.