Arrival at Ben Gurion Airport where you will be met by our representative and transferred to your hotel.  Overnight in Tel Aviv.

Drive along the coastal plain to Caesarea located half way between Tel Aviv and Haifa once the Roman capital of the region to view the excavations of the Crusader-era city, the picturesque and well preserved aqueduct and amphitheater that has been restored to its former glory and is now used as a concert venue. Proceed to Muhraka, the site of confrontation between Elijah and the Prophets of Baal and enjoy the spectacular view of the Jezreel Valley and the lower Galilee. Southeast of Haifa is the ancient city of Megiddo identified as the site of the Armageddon where you will learn the impressive history of this battlefield as you visit the archaeological excavations revealing the remains of 20 + cities built on top of each other as well as the well preserved water supply system. Continue onto Acre to visit the remarkable underground Crusader City and crypt. This ancient city possesses a long history intertwined with various cultures. Walk through the old city recognized by UNESCO as a World Heritage Site to visit the local market and harbour. Overnight in a hotel on the shore of the Sea of Galilee.

After a short tour of Tiberias situated on the western shore of the Sea of Galilee named after the Roman Emperor, enjoy a 45 minute boat ride on the tranquil waters of the Sea of Galilee. Also known as the Kinneret, it is the lowest freshwater lake on earth and the second lowest lake in the world. It is a place of Biblical interest since Jesus taught the crowds by the shore (Mark 4:1-34) and preached while standing in a boat on the Sea of Galilee. At Kibbutz Nof Ginossar we stop to visit the Yigal Allon Center housing the 2000 year old “Jesus Boat” discovered by two fishermen brothers. The boat was buried in mud near the shore of the Sea of Galilee. At the ancient fishing village of Capernaum on the northern shore we see the remains of the 2nd century synagogue and the octagonal Church of St. Peter. A short drive takes us to Tabgha, the site of the Miracle of Fish and Loaves where we visit the Church of Multiplication with its 4th century mosaic floor. In a serene setting we find the Mount of Beatitudes, the place where Jesus delivered the memorable Sermon on the Mount. From here we drive to the Banias Springs and tour the strategic Golan Heights. Overnight in a hotel on the shore of the Sea of Galilee.

Our day begins in Cana where Jesus performed His first Miracle turning Water into Wine at a marriage feast when there was no more wine. A short drive takes us to Nazareth, the hometown of Jesus and one of the most important Christian sites in the Holy Land. Here we visit the Church of the Annunciation, Joseph’s Workshop and Mary’s Well. We are now on our way to the Baptismal site of Yardenit on the Jordan River frequented by Christian pilgrims. Special white robes must be worn during Baptism. These can be rented or purchased on site. NOTE – bathing suites must be worn underneath. If required, we can assist in providing a clergy to perform the Baptism. There is no resident clergy. Moving on we come to Beit She’an, once known as Scythopolis which played an important role in the history of the region. We stop to visit the newly excavated Roman city and amphitheater. Driving along the Jordan Valley we arrive in the holy city of Jerusalem.

Overnight at your hotel.

This morning enjoy the magnificent view of the city from the Mount of Olives site of many Biblical events and named for the olive groves that once adorned its ridges before heading to the Church of All Nations located next to the Garden of Gethsemane believed to be built over the rock on which Jesus prayed in agony on the night before He was crucified. See the Tomb of King David and the Room of the Last Supper also known as the Cenacle on an upper floor of the same building. Enter the walled city and walk through the Roman Cardo, an ancient street starting at the Damascus Gate in the north and running southwards to the Zion Gate lined with a cow of columns on each side. Visit the Jewish and Christian Quarters, two of the four traditional quarters of the Old City. Moving on we come to the Western Wall, an ancient limestone wall in the Old City also known as the Wailing Wall or the Kotel. The venerated Temple Mount is next. Take a solemn walk along the Via Dolorosa, the Way of Sorrow that is believed Jesus followed on the way to His Crucifixion. Pass the Oriental Bazaar with its colourful alleyways filled with vendors on our way to the Church of the Holy Sepulchre found in the Christian Quarter built on the traditional site of Jesus’ Crucifixion and burial. Drive to the Garden Tomb just outside the old city walls which was unearthed in 1867 where we pause for a few serene moments of reflection.

Drive to the ancient village of Ein Karem in West Jerusalem where a few steps from the main road we will visit the Church of Visitation where according to tradition Mary recited the Magnificat, her song of praise known as the Canticle of Mary, one of the most ancient of Marian hymns. Afterwards we head to Yad Vashem located on the western slope of Mount Herzl also known as the Mount of Remembrance, Israel’s official memorial documenting the story of the victims of the Holocaust. Situated on a hill in Givat Ram is the Israel Museum, the largest cultural institute in Israel. Here you will find the Shrine of the Book where the priceless Dead Sea scroll fragments are housed and the miniature model of Jerusalem as it was during the Second Temple period. About 10 kms. south of Jerusalem we come to Bethlehem*, the birthplace of Jesus where we stop at Shepherds’ Field where an angel announced the birth of Jesus. Walk through Manger Square in the center of the city where it was said Jesus was born. Visit the Church of Nativity which holds religious significance for Christians as the birthplace of Jesus. It is considered to be the oldest church in the Christian world. To stop looters in past centuries, one has to stoop low to enter the church. its interior is minimal with no pews. Return to Jerusalem.

Driving through the Judean Hills we come to Qumran, an archaeological site in the West Bank where the Dead Sea Scrolls were found in 1946/47 in caves by a young shepherd looking for stray goats. Continuing along the shores of the Dead Sea we arrive at Masada, the isolated mountain fortress of King Herod and the last stronghold of the Jews after the destruction of the Second Temple in 70 AD who chose to commit mass suicide rather than be enslaved by the Romans. To reach the top we ascend Masada by cable car for a tour visiting the remains of the walls, the palaces, synagogue and bathhouse. Descend by cable car and continue to the Dead Sea, the lowest point on earth where you have an opportunity of using the spa facilities of the hotel (at additional cost) or floating in the buoyant waters and cover yourself with the mineral rich mud believed to possess therapeutic effects (weather permitting).

Travel south through the historic Negev desert covering more than half of Israel arriving in Timna, a large geological and archaeological park where you will marvel at the multi-colored rock formations and copper mines, the highlight being Solomon’s Pillars.

Continue to Eilat, the southernmost resort city on the shores of the Red Sea where you can visit the Underwater Observatory Marine Park built into a coral reef and enjoy a close up look at the rich marine life in the Gulf of Eilat. 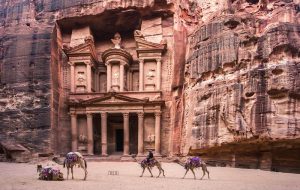 You have the choice of a free day in Eilat or taking an optional day tour to Petra. After assistance with border formalities we are on our way to Petra, the astonishing rose-red city built by the Nabateans (an early Arabic tribe). Your visit begins with the possibility of a short horseback-ride (cost not included) for about 700m to the entrance of the Siq which is about 1.2 km long (walking distance). Petra is famous for its huge monuments such as the treasury, royal tombs, the court, Roman theatre, Roman street, Qasr al-Bint (Palace of Pharaoh’s daughter)and many other smaller fascinating monuments. The city itself is almost 45km² and is considered to be the second wonder of the world. After your visit, time for lunch in a nearby restaurant. Afterwards drive back to the border with a possibility of stopping in Aqaba, the only coastal city in Jordan for a walk around. Continue to the border arriving around 18:00 and cross back into Eilat.

Overnight Eilat. (A visa is required to enter Jordan).

This morning we leave Eilat travelling via Mitzpe Ramon where we stop to gaze into the Ramon crater, a geological wonder. A short drive takes us to Sde Boker further in the Negev, once the retirement home of David Ben Gurion, the first Prime Minister of Israel. Stop to see his hut and gravesite overlooking the magnificent Zin Valley. After enjoying a short camel ride, dismount and continue to an authentic Bedouin tent for a light lunch and to learn about Bedouin hospitality. Our final stop will be at Hatzerim Air Force Base just west of Beer Sheva where we will view a display of Israeli and foreign aircraft and hear the story of this brave fighting force. Continue to Tel Aviv.

Airport for departure. Today marks the end of your journey.

Your land arrangements include:
– Sharing transfer on arrival and departure (from/to Ben Gurion Airport)
– 10 nights accommodation on bed and breakfast basis except for Kibbutz Lavi – on breakfast and dinner basis
– 8 touring days as per itinerary with English speaking guide
– Lunch and spa (cost of treatments not included) at the Dead Sea
– Light lunch in a Bedouin tent on Tuesday on the way from Eilat to Tel Aviv
– Entrance fees to the sites visited as per itinerary
The hotels might be replaced with similar ones

Your land arrangements do not include:
– Airfare to and from Tel Aviv
– Departure taxes, fuel surcharges or airport improvement fees
– Porterage at the airport or hotels
– Insurance
– Early check in/late check out
– Single room supplement – a limited number of single rooms available on payment of supplement
– Meals and beverages not mentioned
– White Robe or services of a Pastor during Baptism
– Optional tours not quoted Optional tour to Jordan including lunch
– Jordanian visa charge/border taxes
– Optional tour to Petra
– Horseback ride at Petra
– Gratuities for individual services, laundry and valet service and any other items of a purely personal nature
– Tipping to guide, driver, hotel or restaurant staff, horse handler in Petra
– E. & O.E.