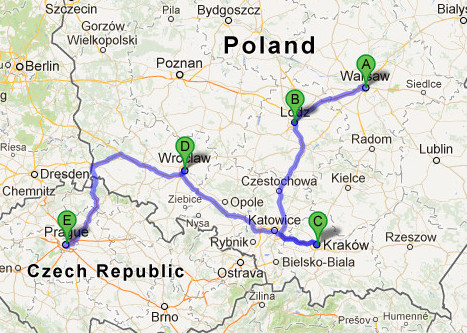 This 10-day tour offers the traveler an in-depth view of Jewish culture and history in Poland, starting in Warsaw and touring through key sites in Lodz, Krakow and Wroclaw. The journey ends in the Czech Republic with visits to places of interest in Prague and Terezin.

Transfers to and from the airport

Upon arrival in Warsaw, we take an orientation walk (no interior visits) through the Old Town. Return to the hotel for relaxation and to freshen up before dinner. In the evening we proceed to the Beit Warszawa, the Jewish Cultural Association, co-founded by Jews who wished to practice Judaism in a more liberal way than that offered by the only other Jewish spiritual center in Warsaw, the Orthodox Synagogue. The association’s main goal is to familiarize the congregation with Jewish religion, history and tradition.

Meet your professional local guide to see the many Jewish sites that bear witness the difficult history of WWII, including the Nozyk Synagogue, the Warsaw Ghetto and the bunker on Mila Street, the monumental memorial of the Heroes of the Warsaw Ghetto, and the Umschlagplatz. Welcome dinner at “Pod Samsonem”, a local restaurant in the Old Town serving typical Polish and Jewish style cuisine. Later enjoy a short recital of Yiddish songs performed by the actors of the State Yiddish Theater in Warsaw.

In the morning see the Okopowa Jewish Cemetery, the largest one in Warsaw founded at the beginning of the 19th century. Meet the Director of the Okopowa Jewish Cemetery who will talk about its history. We depart for Lodz, a city where Polish, Jewish and German traditions intertwine.  Overnight in Lodz is at Andel’s Hotel, a jewel of architectural design and impressive historic detail.

The hotel is situated on the grounds of Manufaktura, one of the largest shopping, culture and entertainment centres in Poland. We begin at the magnificent interior of Poznanski Palace– once belonging to the Poznanski family, who were among the wealthiest Jewish families in the city.  Dinner is served at the Anatewka Restaurant, designed in the epoch of the city’s history in the Polish- Jewish tradition.

In the morning see the Jewish Cemetery, the largest one in Europe where approximately 160,000 people are buried. After lunch at a local restaurant we depart for Krakow. Upon arrival we take an afternoon tour of the Old Town and its Main Market Square, lined with magnificent houses and palaces. See Cloth Hall built before 1349, but altered in the 16th century. Visit the many shopping stalls, the National Museum, and the Gothic Church of Our Lady. The balance of the day is at leisure.

We begin with a guided tour of Krakow to the Wawel Royal Castle, known for its priceless Flemish tapestries. Continue to the Kazimierz district, the part of Krakow which was inhabited by the Jews until WW II and served as a model of Jewish life in the Diaspora. Drive into the labyrinth of streets and alleyways. Visit the famous Remuh Synagogue and the Museum of Jewish life in Kracow found at the Old Synagogue.

After a short break for tea and cake at the Cheder Café, see a documentary movie about the history of Kazimierz district. Visit the newly opened museum located in the former Oscar Schindler’s Factory. The main exhibition “Krakow under Nazi Occupation, 1939-1945” showcases life during the war for Poles and Jews. Dinner will be served at a Jewish restaurant with a Klezmer music concert.

In the morning we drive to Oswiecim.  Visit the Chewra Lomdej Misznajot Synagogue. See the exhibition “A new life” tour of Oswiecim (Oszpicin) with an introduction to the history of the city, and a short presentation on the history of Jews and Poles in Oswiecim.

Afterwards, we drive to Auschwitz – Birkenau, considered the largest of the Nazi concentration camps. In the late afternoon we visit the Galicia Museum for a short presentation on the museum. The Galicia Jewish Museum commemorates the victims of the Holocaust and celebrates the Jewish culture of Polish Galicia, presenting Jewish history from a new perspective. Later we meet with the Righteous among the Nations. Dinner is on your own.

Departure for Wroclaw, a city situated in the middle of the Silesian Lowland where the Odra River branches out to form 12 islands.  Later we take a tour of the heart of Wroclaw, the Market Square and the Town Hall. Wrocław’s Jewish community is one of the oldest in Poland dating back to the 12th century. See the White Stork Synagogue and the Old and New Jewish Cemeteries. In the evening, meet with the representatives of Jewish community in Wroclaw before dinner.

Drive to Prague and upon arrival in the “city of a hundred spires” take an afternoon tour of the Jewish Quarter or the Prague Jewish Ghetto, as it later became known.  See the buildings that form the best preserved complex of Jewish historical monuments in the whole of Europe. Six synagogues remain, including the Old-New Synagogue and the Spanish Synagogue. Visit the Jewish Town Hall, the Old Jewish Cemetery and the Jubilee Synagogue.  In the evening enjoy dinner on a boat with a beautiful panoramic view of the city.

Begin a half day tour to Terezin, the name of a former military fortress and adjacent walled garrison town in the Ústí nad Labem Region of the Czech public. During WWII, the Gestapo used Terezin as a ghetto concentration for Jews from Czechoslovakia, Germany, Austria, the Netherlands and Denmark. Designed to be a “model” concentration camp, it served as the largest Gestapo prison in the Protectorate of Bohemia and Moravia. Visit the Jewish Cemetery, the Memorial Monument and a small fortress with the remains of equipment from the concentration camp. The afternoon is free. In the evening, enjoy a farewell dinner with special folk entertainment to be arranged at a local Prague restaurant.

Transfer to the airport for you flight home.

We can also custom-design tours of any size according to your individual requests.