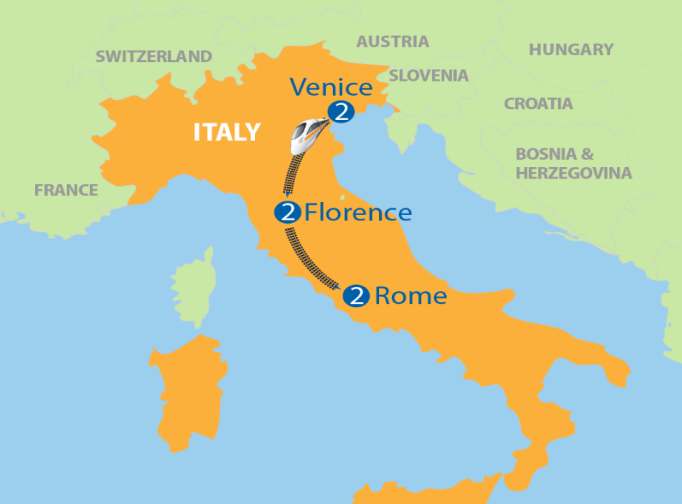 All departures are guaranteed. Travel any day.

This 7-day tour takes you to visit three legendary cities in Italy. Each of these unique cities has its own architecture, customs, cuisine and points of interest. Venice, the romantic city of canals is linked by over 400 bridges. Florence, the Cradle of the Renaissance houses some of the greatest artistic achievements in the world. And the Eternal City of Rome, the capital of Italy is named after its founder and first king, Romulus.

This vacation can be combined with our Escorted tours, Adriatic cruises or other Independent journeys.

Rates are per person, in USD based on double occupancy.

Day 1 Arrive in Venice
Welcome to Venice, an ancient and historically important city also known as the “City of Canals,” “The Floating City” and “Serenissima”. Upon arrival, you will be met before walking to the pier to board a water taxi and then transferred to your hotel pier. The rest of the day is free to relax or to begin exploring on your own.

Day 2 in Venice
This morning enjoy a city walking tour starting at St. Mark’s Square, the main square of Venice situated at the end of the Grand Canal. Visit the Doge’s Palace, one of the landmarks of the city and a masterpiece of Gothic architecture. Continue to St. Mark’s Basilica situated at the eastern end of Piazza San Marco and connected to the Doge’s Palace. It is one of the most beautiful cathedrals in Europe. St. Mark’s Campanile (Bell Tower) is the tallest buildings in Venice. The Bridge of Sighs also known as the “Ponte Dei Sospiri” connected the New Prison to the interrogation rooms in the Doge’s Palace. It was named the Bridge of Sighs for the inmates that walked along the bridge sighing at their last glance of freedom. The tour ends with a visit to a glass blowing factory where you will see a demonstration of a traditional Venetian glass blowing. The rest of the day is at leisure. (B)

Day 3 from Venice to Florence
Make your way to the Santa Lucia train station to take the high-speed train to Florence. Upon arrival in Florence home of the Renaissance make your way to your hotel. The rest of the day is free. (B)

Day 4 in Florence
Today depart on a walking tour in the old city center to the Duomo Complex featuring Giotto’s Bell Tower. There is no elevator to the top, there are 414 steps for a breathtaking panoramic view of the city and the surrounding hills. The bell tower has seven bells, the largest known as Santa Reparata. In front of the Cathedral is one of the most important monuments in the city.- the Baptistery which includes the famous Porta del Paradiso also known as the golden Eastern Doors or the Gates of Paradise depicting scenes from the Old Testament. Finally, the Cathedral with its magnificent Cupola del Brunelleschi, a Renaissance masterpiece created by Filippo Brunelleschi considered the largest masonry dome ever constructed. A short walk brings you to the renowned Galleria dell ’Accademia where you can admire the famous “David” by Michelangelo, possibly the most famous sculpture in the world. Inside you will also have the opportunity to see Michaelangelo’s unfinished “Prisoners” amongst other well-known works. (B)

Day 5 from Florence to Rome
Make your way to the Florence train station to take the high speed train to Rome. Upon arrival, make your way to your hotel. The rest of the day is free to start exploring on your own. Perhaps a walk to Spanish Steps consisting of 138 marble steps connecting the lower Piazza di Spagna with the Piazza Trinita Dei Monti. Or perhaps the famous Trevi Fountain, one of the most famous fountains in the world. (B)

Day 6 in Rome
The regular tour of the Vatican Museums, one of the largest museum complexes in the world. This priceless collection was accumulated by the Catholic church over centuries. The tour begins by coach and follows the ancient Aurelian Walls which once surrounded the ancient city. Finally, on arrival at the Vatican Walls, your guide will then lead you into the Vatican Museums and St. Peter Basilica, a Renaissance church within Vatican City and one of the most important churches in the Catholic world. Next, you arrive in the famous Sistine Chapel in the Apostolic Palace once known as Cappella Magna. Here you will see the famous “Last Judgement” by Michelangelo. This is one of the most famous painted ceilings in the world. (B)

Day 7 Depart Rome
After breakfast, say arrivederci Roma as you are transferred to Rome airport for your flight home. (B)