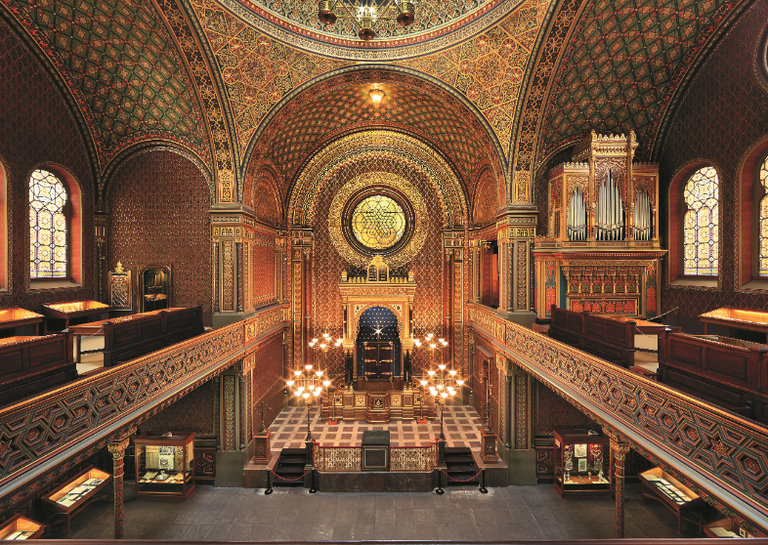 The Jewish Quarter in Prague is home to a number of buildings that have their own stories to tell when it comes to the history of Prague, not least the neighborhood’s six synagogues. The confusingly named Old-New Synagogue is not just the oldest in the Jewish Quarter; it is also the oldest active synagogue in Europe. Legend has it that the body of the fabled Golem lies in its attic, the folkloric monster lying in wait until it is needed to save Prague’s Jews once again.

As famous as the Old-New Synagogue is Pinkas Synagogue, the second oldest in the city and now home to a poignant memorial to the lives lost during the Holocaust. That memorial is said to be the longest epitaph in the world, the names of more than 78,000 individuals who perished in the Nazi death machine.

The Spanish Synagogue may be the newest in town, but it is also arguably the most beautiful. This Moorish Revival delight was completed in 1868, and its exquisite interior is among the most impressive in Europe.

The Dohány Street Synagogue is the largest in Europe, and second to only one other in the entire world. It was the first building in Pest to be designed specifically as a synagogue, built in Romanesque style combined with Moorish Revival.

Enclosed as a ghetto during World War II, the Jewish quarter of Pest has kept the memories of the Holocaust fresh ever since. A temporary cemetery was created in the synagogue courtyard on Wesselényi Street – the resting place of nearly 2600 martyrs. Perhaps the best‑known Holocaust memorial in the country is the Emmanuel Tree of Life Memorial in the synagogue’s garden, depicting a weeping willow. The 30 thousand leaves of the tree bear the names of the Hungarian victims of the Holocaust, and when the wind blows, the leaves ‘start to weep’.

North of the Chain Bridge, at the edge of the Pest side embankment of the Danube, a peculiar memorial: a row of empty pairs of shoes made of metal remind us of the victims shot into the river at the spot during the brief reign of terror by the Nazi Hungarian Arrow Cross Party.

With its abundance of well-preserved historical sites, Kraków is an excellent place to start exploring the Jewish heritage, especially the former Jewish quarter of Kazimierz. There are several temples in the district. Many of them have been restored, but only the Remuh and Tempel Synagogues are used for worship services. Other places of interest include the Ethnographic Museum, the Galicia Jewish Museum, and the Center for Jewish Culture.

In Warsaw, the Jewish Historical Institute is a good place to learn all about the history and culture of Polish Jews, past and present. The modern Museum of the History of Polish Jews POLIN brings the experience of 1000 years of Polish-Jewish coexistence to light with interactive displays, reconstructions, and projections. The restored Nożyk Synagogue is the only surviving prewar Jewish temple still operating in Warsaw. The Jewish Theater in Warsaw is one of the two European venues that perform plays in Yiddish.

During World War II, the disastrous and tragic years of the Nazi-German occupation left a dark mark on Poland, Poles, and Polish Jews. The infamous Nazi-German extermination camps of Auschwitz-Birkenau, Treblinka, Majdanek, and six others stand as a stark reminder of the unfathomable evil brought by totalitarian ideology and regime. These camps, museums, and memorials are open to the public and available to anyone who wishes to visit.

The Slovak Jewish Heritage Route is a network linking 24 Jewish heritage sites around Slovakia. These include synagogue buildings, branches of the Museum of Jewish Culture, and three historic Jewish cemeteries. Only sites that have been adapted for dignified cultural and educational use, or those that are undergoing restoration for such purposes, can be granted the privilege of being included in the Route network.

The only remaining synagogue in Bratislava is located on Heydukova Street, not far from the historic city center. The interior includes a large sanctuary in which modern steel-and-concrete construction and contemporary Cubist details are combined with historicist elements, such as the arcade of the women’s gallery, a metal bimah, and the ark.

The Slovak National Museum – Museum of Jewish Culture’s location is very significant, given that the Zsigray Manor is one of the last two remaining original buildings of the former Jewish quarter. The permanent exhibition presents the history of Jews since their arrival in the territory of today’s Slovakia in the 1st century CE to the present. It describes the everyday and festive life of the Jewish population, an overview of the most important holidays, the interior of the synagogue, as well as important personalities of Jewish origin who made Slovakia famous in various areas of artistic, cultural, social and scientific life.